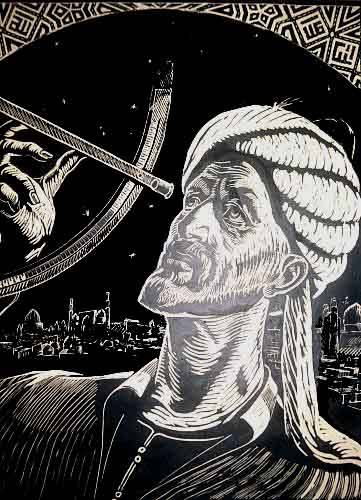 Visiting the Muslim Heritage Exhibition at the London Science Museum, I couldn’t help wondering how ancient Arab scholars would view Muslims in the contemporary world.

Having said this, the discoveries and inventions of Arabs, as far back as the 7th century, remain largely unknown to the world at large. This is unfortunate since ancient Muslim genius is credited with paving the way for many important objects we use in everyday life. How about the toothbrush, for a start?

In 9th century Baghdad, the Beit al Hisma (House of Wisdom) created by the fifth Abbasid Caliph, Hārūn al-Rashīd, attracted the cream of Muslim intellect becoming a centre of learning and research without equal.

Working in ‘The House,’ Abū Yūsuf Yaqūb ibn Isāq al-Kindi, (considered the Father of Arab philosophy) translated works by Aristotle, as well as writing over 300 treatises, not only on philosophy, but mathematics, astronomy, meteorology and medicine.

Observatories were established; the oldest surviving astrolabe in the world was made in Baghdad, and the calculations of the 9th century mathematician Muhammad ibn Mūsā al-Khwārizmī, laid the foundation for future research into the development of the micro-chip.

The Abbasid caliphs themselves took a keen interest in science and the arts. Books acquired from libraries in Europe and the Middle East, were brought overland by camel for scholars to translate from the Latin, Greek, Persian, even Sanskrit texts.

Some of the many fascinating exhibits include surgical instruments, little different to those in use today; a copy of a map of the known world, conceived by the 12th century Andalusian cartographer al-Idrisi, and a model of the junk used by the Chinese Muslim explorer Zeng He,` a contemporary of Columbus, who visited 37 countries on his voyages of discovery.

Water wheels and windmills are rooted in ancient Muslim civilisations: clocks, cameras and conservatories were all conceived by Arabs. One Abbas ibn Firnas, a Berber living in 9th century Cordoba, was the first man to take flight using a pair of feathered wings.

These and other inventions can be seen in this unique display marred only by noisy and unruly visiting school groups.

Australian photojournalist and author. Used London as a base for nearly forty years while freelancing in the Middle East, Arabian peninsular, Africa and South Asia. Have written and illustrated more than a dozen books and travel guides. Operates a well regarded religious images stock photo library: www.worldreligions.co.uk. Live in Leura in the Blue Mountains outside Sydney.
View all posts by Travels with My Hat →
This entry was posted in General and tagged 1001 Inventions, Arab, astronomy, exhibition, Muslim, Uleg Beg. Bookmark the permalink.