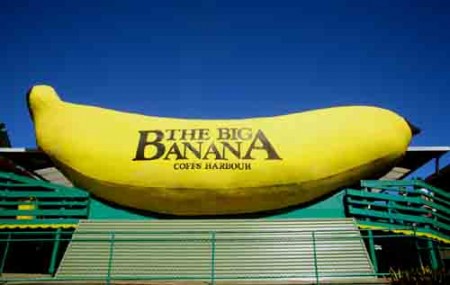 Lacking in historic architecture, several towns in Eastern Australia have come up with the “Big Brand” an item, that if not entirely beautiful, is located somewhere of regional interest.

The tropical state of Queensland leads the pack with a Big Mango at Bowen, a Big Crab at Cardell a Big Barramundi at Daintree, a Big Cassowary at Mission Beach, a Big Peanut on the Atherton Tableland and a Big Crocodile at Normanton, in the remote Gulf of Carpentaria.

Not to be outshone, New South Wales has a Big Merino in the sheep belt of Goulbourn, a Big Prawn in Ballina on the far north coast and on the mid-north coast, perhaps the Big Daddy of all – the Big Banana, erected on a hillside outside Coffs Harbour, 565 kms north of Sydney.

The Big Banana was born in 1964 when a local grower wanted to attract passing traffic to his roadside stall. Choosing as model, the best looking banana from his plantation, he commissioned a builder to construct a giant representation of the fruit.

An instant hit, four years later the Big Banana was sold to Horticulture World, which expanded and developed it as an educational showcase immortalising Musa balbisiana which clothe the hilly hinterland around Coffs Harbour.

A local landmark, today the Big Banana offers everything from a multi-media presentation on growing and packaging bananas, to guided walks through the 20 acre plantation. There is a Big Banana Toboggan Run,  an ice-skating rink and a large gift-shop with a fascinating display of banana themed souvenirs: beer mugs, bar mats, water-pistols, key-rings, rulers, toothpick holders, t-shirts – all Made in China.

Refrigerator magnets are the best selling item I was advised by the genial saleswoman who held up what resembled a yellow phallus, but was apparently a “banana keeper” for keeping one’s banana fresh. 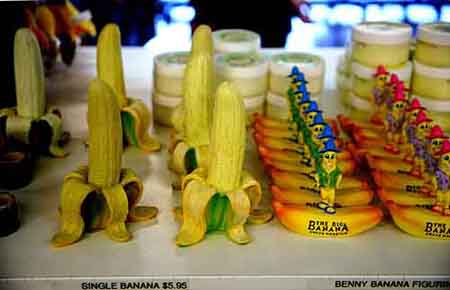 I also learned there is a Big Banana Birthday Club when juvenile members receive a gift from Benny Banana (right in the photo) and a series of exciting Corporate Events such as The Big Banana Bunch Relay when teams compete to see who covers 20 metres fastest while carrying a bunch of Big Banana bananas. There is also a Big Banana Javelin contest to see how far one can throw a banana without it coming back and smacking one’s head like a boomerang.

The Big Banana is a must see when visiting Coffs Harbour which it is true to say has very little else as exciting or as innovative.

Australian photojournalist and author. Used London as a base for nearly forty years while freelancing in the Middle East, Arabian peninsular, Africa and South Asia. Have written and illustrated more than a dozen books and travel guides. Operates a well regarded religious images stock photo library: www.worldreligions.co.uk. Live in Leura in the Blue Mountains outside Sydney.
View all posts by Travels with My Hat →
This entry was posted in General and tagged banana, big, Big Banana, Big Merino, Big Prawn, Coffs Harbour, crafts, prawn, tourism. Bookmark the permalink.

4 Responses to BIG IS BEAUTIFUL