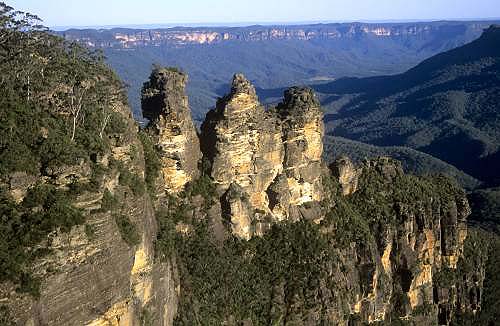 MY BOY`S BEEN FOUND!
The area where Jamie Neale, the British bushwalker went missing, is the Blue Mountains National Park, a World Heritage Site located in the Great Dividing Range, 70 miles west of Sydney.
The name `Blue Mountains` derives from the blue haze produced by oil exuding from the gum-trees – more than 91 eucalypts have been identified – which cover the area in often impenetrable bush.
Few bushwalkers are aware of the park`s spiritual significance to aborigines of whom the Gundungarra and Darug are the main local tribal groups. Features in the landscape, perceived as merely a rock, or a waterfall, have powerful mythological and ceremonial links with their ancestral Dreamtime.
Weathered rock up-thrusts, known as the Three Sisters, photographed by coach-loads of tourists every day, are in fact Meehni, Wimlah and Gunnedoo from aboriginal legend. To protect them from harm, a witch doctor turned them to stone, but before he could reverse the spell, he was killed in a feud with a tribe lower down the mountain.
Before white men came, aborigines lived in this natural wilderness eating `bush foods` along with killing the odd wallaby, or two. Still today, there are no facilities.
Jamie survived by eating berries and sleeping rough, only a mile away from 3-star restaurants in Katoomba, the town above the Jamieson Valley where he was found. It`s a very spiritual place: note the names.
C.Christine OsborneImage: The Three Sisters, Katoomba, NSW Source: www.copix.co.uk