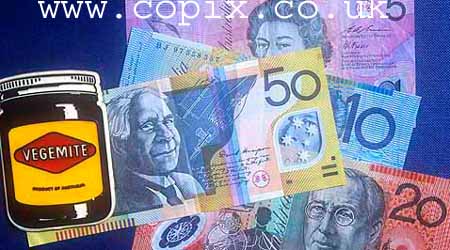 Ruddymite, Wow Chow and 2ritemite were some of the 48,000 suggestions for a new version of Australian VEGEMITE before Kraft Foods settled on the less than mouth-watering name iSnack.2.0.

Like most (all) Australians, I went onto Vegemite as soon as I came off the breast. We ate it on toast for breakfast. Vegemite sandwiches were taken to school. Either neat or with slices of cheese. And `Fairy Fingers`-Vegemite on thinly sliced white bread – were served at children’s birthday parties.

It is understood that the new hybrid VEG is mixed with cream cheese to make it spread more easily, but as far as I’m concerned, it was always easy to spread. And it is one of the first items I throw in when packing for a trip. As important as my toothbrush. Or my laptop.

Vegemite was impossible to find in London when I arrived in the sixties along with Germaine Greer, Clive James, Richard Neville & Co. We had to depend on friends bringing it over by sea when it was valued no less than the recent Roman hoard found in Shrewsbury.

I would decanter it into something small to ensure I had it for breakfast wherever I happened to be. And if it was to be a long research trip, I took an entire jar with me.

Racing to catch a flight in Kenya on one occasion, I left the precious black spread in a taxi and have wondered since what the driver made of it. (Did he taste it, or grease the axles with it?) Sainsbury’s , the mega UK supermarket chain now stocks Vegemite so expats no longer feel deprived, although I recently had to take a jar out to a friend in Zanzibar.

I wait patiently to try iSnack 2.0 which is being marketed with such hype you`d think it was a newly discovered species of Australian marsupial.

Dean Robbins, a 27 year old web designer from Perth who chose the new product name is quoted as saying: “To think I will go down in history is overwhelming.”

Australian photojournalist and author. Used London as a base for nearly forty years while freelancing in the Middle East, Arabian peninsular, Africa and South Asia. Have written and illustrated more than a dozen books and travel guides. Operates a well regarded religious images stock photo library: www.worldreligions.co.uk. Live in Leura in the Blue Mountains outside Sydney.
View all posts by Travels with My Hat →
This entry was posted in Food and tagged Australia, black, Christine's sites, food, hybrid, iSnack 2.0, photography, spread, Travels with My Hat, veg, Vegemite. Bookmark the permalink.