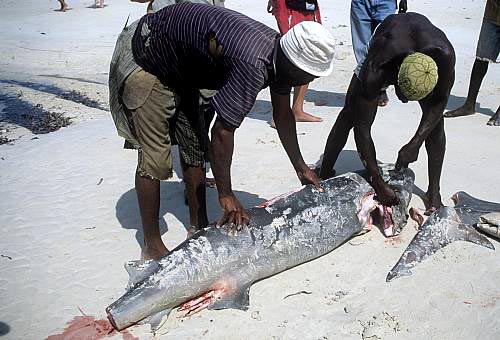 The stocks of several species of fish are seriously endangered due to overfishing caused by demand from unscrupulous restaurants.

While these are located mainly in Asia, notably in China and Japan, several well known London restaurants are serving both bluefin tuna and shark fin soup.
Sharks and bluefin tuna are on the danger list, but while the fishing of both species is condemned by conservationists, neither NOBU`S celebrity haunt in Mayfair, nor the Dorchester Hotel`s CHINA TANG – run by Hong Kong tycoon Sir David Tang – will take them off their menus.
I call for a BOYCOTT of both these restaurants and any others you may come across when dining out in London. Or elsewhere.
About twenty species of shark are said to be under threat. If you see fishermen performing the cruel practice of `finning and tailing` and often throwing the sharks back into the sea to bleed to death, advise the Humane Society International and/or Endangered Species International.
Countries where this practise is rife include: Somalia, Kenya, Malaysia, Taiwan, Japan, Phillipines, the Eastern Arab Gulf states and Yemen.
c.Christine OsborneImage: Finning a shark, Monbasa, Kenya Source: Grazyna Bonati www.copix.co.uk