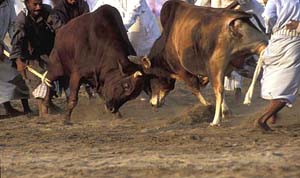 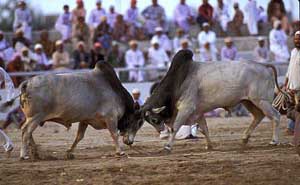 Camel racing, yes. Bullfighting, no! The sight of two massive animals locking horns is one not associated with the Arab world, yet in Oman, the rugged sultanate on the Arabian Sea, bullfighting is a popular spectator sport.

It seems impossible that Omani-style bullfights are a Portuguese hand-me-down, yet ancient Portuguese mariners used Oman, and its northern enclave of Musandam, as a port call on voyages of discovery to India and beyond.

As in Portugal, local bullfighting is bloodless, a contest between two animals of Brahmin blood who test their stamina against each other. A champion bull can command a price of $5000 and more.

The young bulls are reared on a nutritious diet especially high in grains, dates and dried sardines. They are massaged daily and taken on long runs along the beaches of the Batinah Coast of Oman, roughly an hour’s drive north of capital, Muscat. In fact pampered like prize boxers, they live the life of Riley.

When the animals reach about two years old, they are sent to the ‘ring’, an open field surrounded by Japanese made pick-up trucks and four-wheel drives. As many as twenty bulls may participate in a contest, the prospect of driving a ton of snorting beef across several hundred kilometres of desert being no deterrent to their proud owners.

After considerable discussion, a referee selects a pair of animals based on height and weight, a key weapon being the horns which are trained to grow curved to obtain a better grip on the opponent. Contest rules are simple: may the strongest bull win.

Each animal is led out by its owner holding the end of a rope until snorting and pawing the ground, the bulls charge. Whack! the sounds of their horns echoes around the field as spectators, exclusively male, cheer on their favourite.

When one bull bites the dust, the other is declared the victor and tripping over their long pink robes, the owners run after them to pick up the rope which is secured around a foreleg. Occasionally a bull is too quick, and charging through the crowd, he runs off with everyone in pursuit.

Sharia, or Muslim law forbids any kind of wager, so no money changes hands everyone  simply being happy to enjoy a jolly day out. As for the bulls, rarely injured, some may fight a hundred times before eventually dying of old age.

Australian photojournalist and author. Used London as a base for nearly forty years while freelancing in the Middle East, Arabian peninsular, Africa and South Asia. Have written and illustrated more than a dozen books and travel guides. Operates a well regarded religious images stock photo library: www.worldreligions.co.uk. Live in Leura in the Blue Mountains outside Sydney.
View all posts by Travels with My Hat →
This entry was posted in Culture and tagged animals, Arabia, bullfight, bulls, entertainment, fights, Oman, sport. Bookmark the permalink.

One Response to BULLFIGHTING: OMANI STYLE