Every year millions of sharks die a slow death because of what is known as finning: the inhumane practice of slicing off the fins and throwing the living body back into the sea.

Finned sharks either starve to death, or are eaten alive by other predators, but since they need constant movement to enable their gills to extract oxygen, a majority simply drown.

Shark fins are being “harvested” in ever greater numbers to feed the Asian demand for shark fin soup. The Chinese are the biggest customers for this so-called delicacy and like the Japanese intransigence over whaling, they show scant concern for decimating the world shark population. 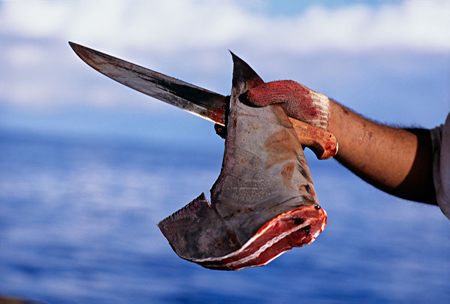 Not only is finning barbaric, but the indiscriminate slaughter of sharks is unsustainable. Since the 1970s the population of several shark species has dropped by 95%.

Due to the clandestine nature of finning, it is difficult to record the numbers of sharks, and the species caught. Estimates are based on declared imports to shark fin markets notably in China, but also Singapore, Korea and Malaysia – all guilty of importing shark fin for restaurant tables.

Several organisations campaign to stop finning. A website seeking a worldwide ban on the practice, is STOPSHARKFINNING, which aims to see that all sharks caught are brought ashore intact. 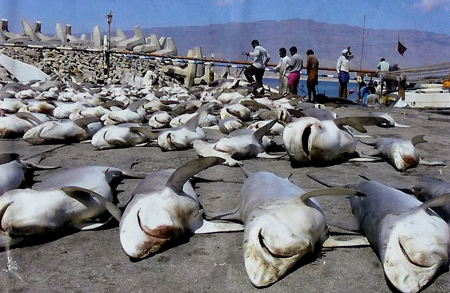 The issue with sharks being finned at sea is that it allows crews to kill large numbers because they only have to store the fins on board (drying them on deck or freezing them). If forced to land the sharks, they cannot kill so many in one voyage. And the meat can be sold.

Australian photojournalist and author. Used London as a base for nearly forty years while freelancing in the Middle East, Arabian peninsular, Africa and South Asia. Have written and illustrated more than a dozen books and travel guides. Operates a well regarded religious images stock photo library: www.worldreligions.co.uk. Live in Leura in the Blue Mountains outside Sydney.
View all posts by Travels with My Hat →
This entry was posted in Comment and tagged Asia, ban, boat, China, fin, finning, fishing, kill, shark finning, soup, stopsharkfinning, tail, trade. Bookmark the permalink.

8 Responses to CHOKE ON YOUR SHARK-FIN SOUP!