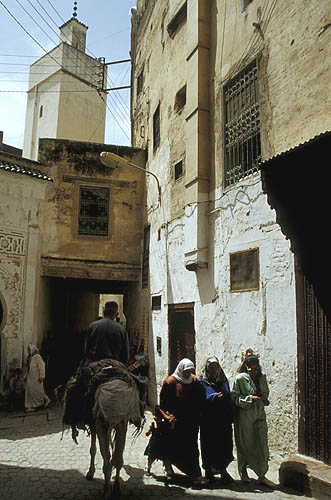 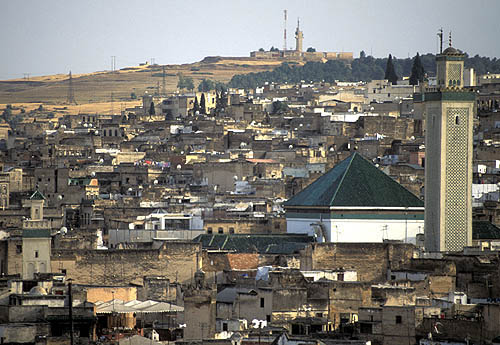 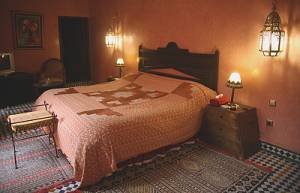 A riad is a traditional house located in the medina – the old residential and commercial heart of ancient towns in Morocco. A typical riad is a three or four storey building whose thick stone walls enclose a central courtyard open to the sky. Smaller riads may only be the width of the height of a date-palm whose trunks were used as beams.

Others owned by prosperous old merchant families have carved cedar ceilings and walls adorned with elaborate plaster-work and zellige tiles. To ensure a family`s privacy there are only tiny exterior windows, but a roof terrace catches cooling breezes and provides a panorama of the skyline.

Many old riads, abandoned when the owner left either to seek work or to upgrade to a modern villa, have been bought by foreign investors who have transformed them into luxurious Maison d’Hotes, a trend started by American architect, Bill Willis in the 1960s when he transformed a run-down riad in Marrakesh into an exotic town-house.

More than 500 riads -mainly in Marrakesh, Fez and in  the coastal resort of Essaouira have now been restored by foreigners using local artisans and drawing on the abundance of crafts sewn, hammered and tapped out in the souqs.

On many trips to Morocco over the years I’ve stayed in a variety of accommodation ranging from the famous Mamounia in Marrakesh to the simple Pension Mauritania in Tangier – even in a crumbling funduq, once used by wool merchants visiting Fez.

On a recent visit to Fez to collect material for my new book, I stayed at the Dar Anebar, a true “Arabian Nights” style riad which has been returned to it’s former glory by Moroccan businessman Ahmed Azami .

“It was my grandfather’s riad and my dream was to restore it, not just for our family use, but so visitors might experience Fassi hospitality in traditional surroundings,” said Ahmed as we sipped mint tea in the courtyard.

“Tourists can stay here from EU90 a night. If we are not fully booked, we upgrade at no extra cost. I want people to feel it is their home. They can even go into the kitchen and watch Naima making Berber bread.”

Fez is considered the culinary heart of Morocco and Naima’s cooking lives up to this reputation. I dined on regal dishes such as bstilla made from flaky pastry stuffed with quail, and lemony tasting tajines using chicken and olives, and lamb cous-cous smothered in toasted almonds. A wine list featured the best of Moroccan wines, There was even Flag beer for any Australian visitors!

Dar Anebar’s five large bedrooms with king-size beds overlook the courtyard. A personal touch is a flagon of argan oil, a nutritive emollient sold in Fez for over a thousand years and recently declared a ‘miracle oil’ by French cosmetic firms.

“We wound our way through the medina and walked into a world of wonder and warmth,” one of hundreds of comment in the Guest-Book, resonated with me after a fall on one of my daily walks through the centuries old souqs.

Down I went among cages of hens, boxes of sardines and baskets of snails as everyone from the butcher, the baker and the candlestick-maker rushed to my aid.

Back at Dar Anebar bandages were produced, my shirt was spirited away and washed, and a glass of freshly pressed orange juice was brought to my room.

When I offered to pay, I was waved away and Ahmed himself drove to me to the CTM station to catch my bus to Tangier.

Australian photojournalist and author. Used London as a base for nearly forty years while freelancing in the Middle East, Arabian peninsular, Africa and South Asia. Have written and illustrated more than a dozen books and travel guides. Operates a well regarded religious images stock photo library: www.worldreligions.co.uk. Live in Leura in the Blue Mountains outside Sydney.
View all posts by Travels with My Hat →
This entry was posted in Travel and tagged building, comfort, cooking, courtyard, Dar Anebar, Fez, house, Maison d'Hotes, medina, Morocco, riad, room, tourism, visitors. Bookmark the permalink.

3 Responses to DAR ANEBAR: AN EXOTIC HOME AWAY FROM HOME IN ANCIENT FEZ