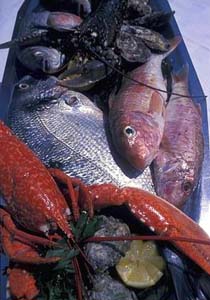 So farewell then Floyd. How we loved your shambolic cookery series. Never without a glass in hand. “Food is life, life is food` you are quoted as saying.

A true bon vivant, Floyd died of a heart attack in Dorset after a final grande bouffe of oysters and partridge washed down with champagne and fine wine.

His death has prompted a flood of `Final Meal` menus from today`s celebrity chefs none of whom can stand in his shadow for entertainment.

Starters included beluga caviar (which I ate for breakfast, dinner and tea while researching sturgeon fishing in the Caspian Sea!) and langoustine, a cross between a mini-lobster and a king prawn from the Atlantic, choice of Theo Randall, head chef at the London ICH.

Agree! How could I forget a lunch of Langoustines Royales with a crisp green salad accompanied by a fine Gris de Boulaoune, one sunny day in Casablanca.

Vichyssoise and smoked eel from Enkhuizen in Holland, would also rate a place on my final meal menu along with Thai soft shelled crab and lamb`s brains au beurre noir. But as I couldn`t possibly eat all in one last sitting, I have compressed my favourite foods into a three course menu:

Australian photojournalist and author. Used London as a base for nearly forty years while freelancing in the Middle East, Arabian peninsular, Africa and South Asia. Have written and illustrated more than a dozen books and travel guides. Operates a well regarded religious images stock photo library: www.worldreligions.co.uk. Live in Leura in the Blue Mountains outside Sydney.
View all posts by Travels with My Hat →
This entry was posted in Food and tagged bouffe, brains, chefs, Christine's sites, cooking, eel, final meal, heart attack, Keith floyd, langoustine, menu, travels with your hat, wine. Bookmark the permalink.