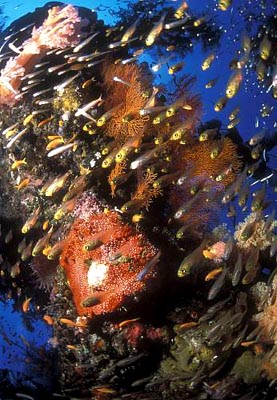 Excerpt from Chapter 2 Red Sea Adventure Travels with My Hat

…My childhood dream was no longer a dream. Or a deadline. Pulling on a mask and snorkel, I followed Morris out into the bay where I looked down on an underwater Eden.

Corals covered every inch of the reef. Some were soft pink and yellow ‘flower’ corals, feathery tentacles waving as they sifted in plankton from around their colony. Others were hard, limestone corals—mosaic, organ-pipe, brain and grass coral — interspersed with lacy orange and red gorgonian sea fans. Still others like the fawn, blue-tipped staghorn coral were the size of small sedans.

Moreover, the abundance of fish was marvellous. Extraordinary! Now I understood why Jacques Cousteau was so enthusiastic about the Red Sea where divers and marine biologists have recorded some 1,200 species. In the first minutes, I identified white, black and bright yellow butterfly fish, red banner fish, goatfish, bream, a rainbow-coloured wrasse, a surgeonfish and a cheeky triggerfish – a species that knows no fear (one of these little fellows had nipped me while I was snorkelling off Rangiora, the great atoll in the Tuamotu Archipelago). 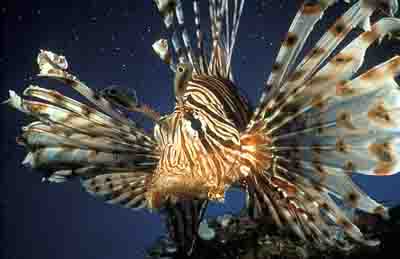 A wall of soft corals dropped 10m (32 ft) to a narrow plateau bristling with pink and mauve elk-horn coral where I spotted a red hawkfish resting in the branches of an orange sea fan, and a regal angel fish hovering near a cluster of lemon-coloured anemones. Green and mauve parrotfish were grinding the coral polyps with pharyngeal teeth and a school of eight squid, my favourite marine creature, jetted through the water like a team of Red Arrows.

When I swam after them, they flushed brown, then yellow and green, and the last animal squirted a puff of sepia-coloured ink. Coming up for air, I was brushed by a soft turquoise-trimmed nudi-branch which Egyptians know as a badia for its undulating movements which resemble those of a belly dancer.

Morris and the other boys managed to spear plenty of fish, but there was no wood to build a fire so we could cook them. Mas’udi writes of the Red Sea coast as being barren more than a thousand years ago, so unlike in the Pacific Ocean, there was no driftwood washed up on the tide-line.

Ruth and I each had a tin of Chinese corned beef and a packet of biscuits brought from Hurghada, but they would not stretch far when shared between six of us. The boys had brought nothing at all…

Australian photojournalist and author. Used London as a base for nearly forty years while freelancing in the Middle East, Arabian peninsular, Africa and South Asia. Have written and illustrated more than a dozen books and travel guides. Operates a well regarded religious images stock photo library: www.worldreligions.co.uk. Live in Leura in the Blue Mountains outside Sydney.
View all posts by Travels with My Hat →
This entry was posted in TWMH Excerpts and tagged anemone, badia, coral, Cousteau, diving, Egypt, fish, Red Sea, squid, triggerfish. Bookmark the permalink.

6 Responses to DIVING AT DISHDABA