Sightseeing by traditional  horse carriage is a pleasant way  to explore the old city of  Luxor in Upper Egypt. For less than five dollars you can clip-clop along the corniche where tall masted feluccas are moored on the Nile between the famous temple sites.

I had flown to Luxor in order to photograph the Coptic easter rituals known as Shemen Nessim in Upper Egypt. Rather than take a taxi to the church, I chose a traditional horse carriage from the row outside my hotel. Placing my camera bag on board, I stepped onto the metal plate to climb up, but it came down on my legs, slicing them to the bone.

“Ambulance!” I shouted and seeing my distress, a French tourist called Florence, helped me to a nearby pharmacy.

Florence (she was definitely a nightingale) asked the pharmacist for bandages to strap my legs and stop the blood flow.

“How much?” I took out an E100 note I had intended for the church collection plate.

“E15” he said. Then thinking better of it, he waved. “Nothing,  alhamdulillah!”

When a taxi stopped outside, with Florence supporting me, I slid onto the back seat and sped off to Luxor International Hospital. 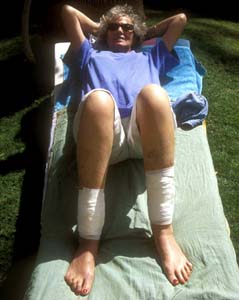 Wheeled into Emergency, I had X-rays and blood tests and within the hour I was in theatre being stitched up by a local surgeon.

I spent three days in hospital and the following four in my hotel arranging via telephone calls with my insurer, to pay my costs and get me home.

Though serious enough —I required a further operation and skin graft back in London— my injuries were not life threatening.

“But they well might have been,” said Thomson representative in Luxor.

“I advise tourists not to travel by caleche but they take no notice,” she told me. 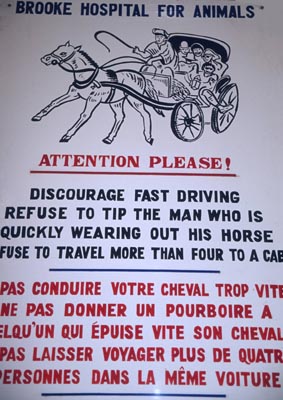 “You see families,  children sitting up with the driver, galloping along the corniche.  Accidents occur when they round a corner and are thrown off,” she gesticulated.

“The Tourist Police are attempting to crack down on scores of illegal horse carriages touting for rides outside Luxor’s hotels,” she continued. “All horse carriages require to register. So check there is an official yellow license plate on the back”.

Wanting details of my mishap, an officer came to interview me within hours of my coming round from the anesthetic. Did I get the driver’s name? Did I record the license number? Did I want to press charges, he wanted to know.

“No”, I explained in my limited Arabic. “In any event the carriage responsible is likely TO BE miles away by now.

Hoping to make a quick buck, many poor fellaheen bring their unstable horse carriages into Luxor which are literally lethal  weapons for unsuspecting visitors.

Locals use them. I saw one carriage with a family of seven squashed in like chickens going to market. But for bare-legged tourists, a carriage ride is an accident in waiting.

Like my own motives, most people want to use this traditional means of transport not only because it is a novel way of sightseeing, but because the fare will help to feed the horse.

Instead it is better to donate to the Brooke Animal Hospital which cares for Luxor’s tired old carriage horses rather than risk having your visit ruined. The moral being never forget to take out travel insurance…