Hunza, the ‘Apricot Capital of Pakistan,’ lies in an amphitheatre of snow-capped peaks, 90 kilometres (62 miles) north of Gilgit in the Northern Areas of Pakistan. My interest in visiting the valley was to investigate its reputation as a sort of Shangri-La where people are said to have discovered the elixir of life.

‘The people are Ismaili Muslims. Their capital, Karimabad, is named after the Ismaili spiritual leader Prince Karim, the Aga Khan,’ said my guide, Riaz Khan, whose uncle was the last thum (ruler) of Hunza.

Karimabad’s grey-rock houses seemed to be stuck on the mountainside with super-glue and unlike the A-frame architecture of alpine resorts, their roofs were flat for drying millet, corn and apricots. More recently it has become a popular base for trekking with many hotels, but at this time there was a single guest-house with no heating and the taps were frozen.

‘I must wash.’ I mimed the action to the bearer-wallah who went outside and returned with a bucket filled from the dripping glacier. Dinner was equally spartan: potato curry and paratha[1]washed down with “Hunza Water”, a mildly alcoholic beverage that locals brew from fermented mulberries.

I awoke to mists drifting up from the valley and people wrapped in blankets pattering along to their fields. A shepherd playing a flute walked past and stumbling up the rocky path I spied a tiny old woman carrying tins of sloshing water. Taking them, I nodded for her to lead the way and while puzzled by this unexpected gesture, she continued climbing up to her stone house facing the icy tooth of Mount Rakaposhi 5,800 metre (19,029 feet) across the valley.

Invited in, I noted her possessions: a bed-roll, a white china cup, an enamel plate of apricots, and pinned on a wall a picture of Tower Bridge from a 1967 London transport calendar. Squatting on her heels in ill-fitting shoes, she cheerfully responded to my questions, via a bright-eyed boy who’d popped in on his way to school.

‘She live up in summer and down in winter. All Karimabad move up-down, or down-up, on same day,’ he said, skipping off.

Suddenly he was back. ‘Where is your husband?’ he asked bossily.

A toothless 104 years old, the lady was a member of the Hunza Centenarians Club. Having no contact with the outside world, she was unaware that eleven years before, man had walked on the moon. Or that Zulfiqar Ali Bhutto the prime minister of Pakistan, had been recently hanged by General Zia al-Haq in Rawalpindi.

By 10 am Riaz had located a dozen people, each one more than one hundred years old including one woman who said she was 310.  She directed us to a house where rosy-cheeked elders were seated on a carpet drinking tea from a rose-patterned thermos flask. One wrinkled faced man, his blue eyes twinkling, wanted to know how old I thought he was.

‘I’ve heard their longevity is linked to a diet that includes lots of apricots. Another theory suggests it might be particles of gold in the water. Can you ask?’ I whispered back.

After a brief exchange in Burushaski, the isolated language of the northern agencies, Wazir Murad fired back a response.

‘Our great age is because we are cut off from urban life. But the new highway is changing things. It’s our custom to offer apricots to visitors, but now the tourists want to pay us. And our young men are returning from this place called Dubai with new ideas. Why do I need a radio? I’ve lived one hundred years without hearing the news.’

More old people entered the room. Seven of us were now seated on the carpet drinking salted tea. A girl carried in chunks of corn bread spread with yak butter and apricot jam and Begum Mehrab, the only woman, passed around a plate of walnuts.

I’d suddenly felt uncomfortable at discussing age, and suggested that Riaz might invite them to guess my own.  ‘Very young, about twenty-five’, smiled the Wazir, putting an arm around my shoulder.

The 101 year old gentleman who was wearing a fine cream cloak, guessed I might be thirty, but peering into my face, Begum Mehrab declared I was thirty-five. Announcing that I’d turned thirty-nine the previous week brought mutterings of disbelief, but learning I was single caused murmurs of consternation, followed by a respectful silence at such misfortune. More walnuts were passed around and several women, wearing the embroidered Hunza cap, popped their heads around the door to stare at me.

‘Women in Hunza work much harder than the men,’ explained Riaz as we walked down to our jeep. ‘They must carry water, fetch wood, cook and help with the harvest. I don’t think you’d like the life.’

‘Because the Wazir has requested I tell you he’s looking for another wife.’

‘I’m a plains person,’ I said and picking up a stone, I hurled it into the Hunza River … 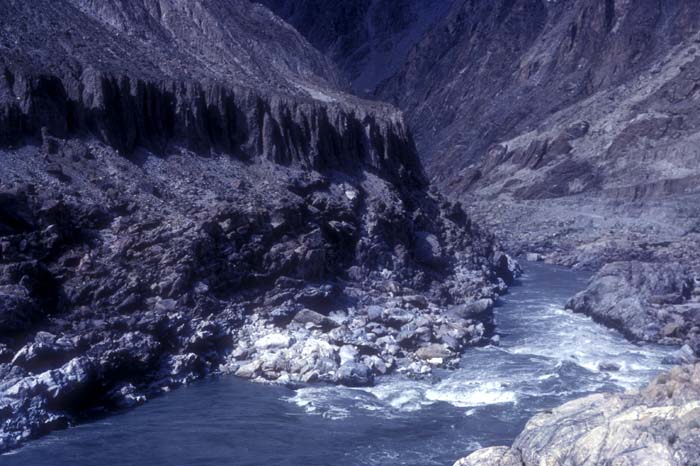 Excerpt from Chapter 6: May you Never be Tired

Australian photojournalist and author. Used London as a base for nearly forty years while freelancing in the Middle East, Arabian peninsular, Africa and South Asia. Have written and illustrated more than a dozen books and travel guides. Operates a well regarded religious images stock photo library: www.worldreligions.co.uk. Live in Leura in the Blue Mountains outside Sydney.
View all posts by Travels with My Hat →
This entry was posted in Culture, Photographs, Travel Narrative and tagged Karakorams; mountains; Hunza; apricots; valley; landscape; longevity; people; Karimabad; travel;, Northern Areas; South Asia;, river. Bookmark the permalink.

17 Responses to HUNZA THE VALLEY OF LONGEVITY