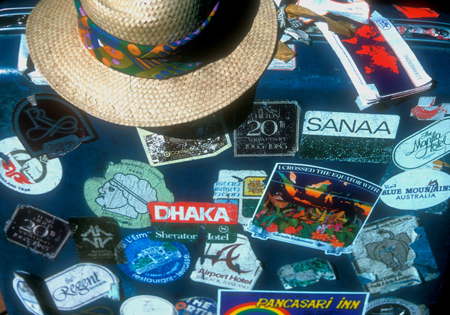 My small pillow. You can’t buy one. They’re considered dangerous to infants. It’s a tiny pillow I took off a Philippine Airlines flight. With this soft little cushion, I can sleep anywhere. And have done so. In hotels when the pillows were hard as concrete. On a customs bench in Morocco. Deck class as I sailed down the Red Sea.

It goes wherever I go. I’ve only lost two on my travels. One was left behind on a horrid coach trip to Paris. A second blew into the Bay of Bengal, when I stood up from my deck chair to escape a tropical squall. I subsequently found replacements on other flghts.  And no, I don`t feel bad about taking 3 little pillows in a lifetime’s flying.

The second item I make sure is packed is my personal cake of soap in a plastic container. This is Roger & Gallet which comes in a variety of heavenly perfumes – tea-rose and gardenia are my favourites – to bring a scent of home.

The third item I never forget is a pareo. Also known as a sarong, a kikoye or simply a cotton wrap. This is a patterned length of cotton material, worn to great effect in Polynesia. But also in East Africa, coastal India and Dhofar in Oman.
The pareo, which I wore daily when working at the Club Mediterranee in Tahiti is a multi-purpose garment. A versatile garment, it can be used as a wrap, as a towel after a shower or a swim, as a sheet, when the night is hot, or stuffed with ice and placed on your head to help cure a hang-over.

Item number four is my swimming costume. I pack this as hand-luggage with my pillow and pareo so if stuck somewhere warm, I can always swim. On two occasions, once off a flight in Singapore, another when I was double-booked in Bombay, I was the only passenger in the airport hotel who was able to enjoy a dip.

Finally, I always pack a mini bottle of scotch.  Whiskey is a reviver when you reach your new hotel room, or in event of drama on your travels. It can be drunk neat if you haven`t water and the Scots would say it doesn’t need ice.
Once delayed for 30 hrs at Khartoum Airport, my small flagon of whisky kept body and soul together when the only alternative was tinned mango-juice.

Australian photojournalist and author. Used London as a base for nearly forty years while freelancing in the Middle East, Arabian peninsular, Africa and South Asia. Have written and illustrated more than a dozen books and travel guides. Operates a well regarded religious images stock photo library: www.worldreligions.co.uk. Live in Leura in the Blue Mountains outside Sydney.
View all posts by Travels with My Hat →
This entry was posted in Travel and tagged carriages, case, christinebosborne, flying, Guinness Records, hand luggage, holidays, items, luggage, pareo, pareu, Roger Gallet, single travellers, soap, Travels with My Hat, whisky. Bookmark the permalink.

4 Responses to I NEVER TRAVEL WITHOUT…