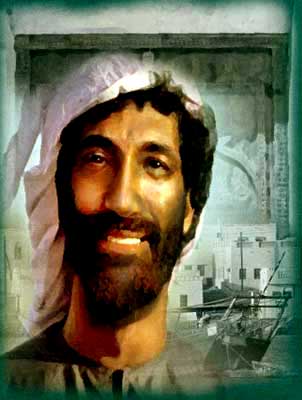 On a visit to Morocco last month I found the tomb of Ibn Battuta, the 14th century Berber Muslim whom many consider to have been the greatest traveller of all time.

Ibn Battuta was born in Tangier in 1304. Aged 21, he completed an arduous pilgrimage to Mecca from where he extended his travels to the Middle East, India, Central Asia and ultimately to China.

My own fascination comes from having visited many of these countries and exotic ports such as Mocha, Basra and other cities mentioned in his journals.

But while I’d been to Tangier on many occasions, I was unaware until this recent trip, that the traveller whom I most admire is buried there.

‘Yes, his tomb is here,’ said the woman in the tourist office – ‘but I don’t know precisely where…’

So I set off along the Boulevard Pasteur, crossing the Grand Soccoto the Rue de la Kasbah where I began asking:  Pouvez-vous me diriger vers la tombeau de Ibn Battuta?

Up the hill and first right,’said a man standing in the doorway of a Tabac.

‘Left, then straight on. Suivez-moi,’ said a man carrying bunches of mint. 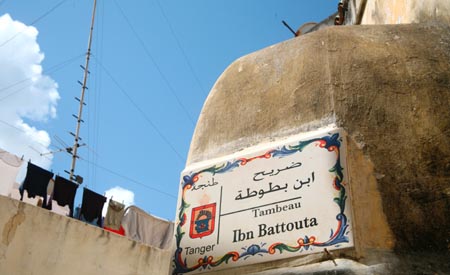 On we went, round this corner, down that alley, up many steps. Then he stopped. Unsure of what he was looking for. But there it was – in a shadowy corner of the medina, washing drying on a line above, a woman filling her jar at a fountain below – the tomb of Ibn Battuta.

I touched it, humbled by the experience: travel in far-off lands is trying enough today. What difficulties and dangers were faced some 700 hundred years ago?

My return to London coincided with the release of the film Journey to Mecca recounting Ibn Battuta`s pilgrimage around 1325-6 to the sacred shrines in Saudi Arabia.

Financed by the King Abdulaziz Public Library and King Faisal Center for Research and Islamic Studies, the short movie essentially illustrates the importance of the hajj to Muslims of whom two million make the annual pilgrimage. (the Qur`an requires that every Muslim of good health and means performs the hajj at least once in his lifetime).

Since Christians are forbidden to visit Mecca – highway signs advise to this effect – the film is a must see for anyone interested in the Muslim rites observed both here and at Medina.

The scene of white-robed pilgrims swirling around the ka`aba in the Prophet`s Mosque is an awesome piece of cinematography. So too are the shots of the ‘great Damascus caravan of more than 10,000 pilgrims with 500 camels’ embarking on the journey- filmed in stunning locations in southern Morocco.

But while Journey to Mecca is a colourful and emotionally engaging epic, to me it does not rise above a movie made in the Cecil B. de Mille mould.

Considering the amount of bureaucracy which would have been involved, it is likely a miracle the film was made at all, but I feel that Ibn Battuta deserves a far bigger tribute than simply as the subject of a PR exercise for Islam.

Australian photojournalist and author. Used London as a base for nearly forty years while freelancing in the Middle East, Arabian peninsular, Africa and South Asia. Have written and illustrated more than a dozen books and travel guides. Operates a well regarded religious images stock photo library: www.worldreligions.co.uk. Live in Leura in the Blue Mountains outside Sydney.
View all posts by Travels with My Hat →
This entry was posted in Travel and tagged film, hajj pilgrimage, Ibn Battuta, journey, Mecca, Morocco, movie, Saudi Arabia, Tangier, travels. Bookmark the permalink.

9 Responses to IBN BATTUTA: the greatest traveller ever