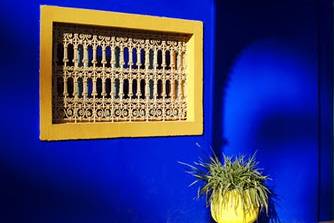 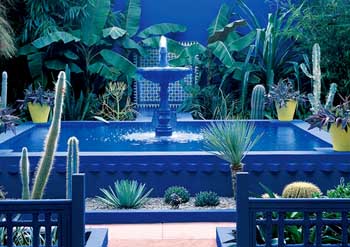 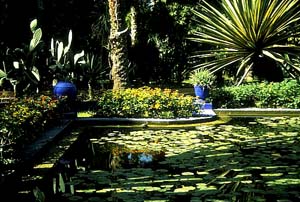 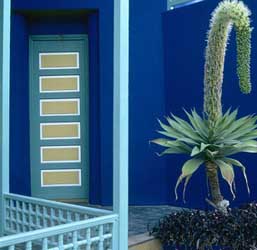 As a child, I used to imagine a door set in a high wall and on pushing it open, I could pass into a peaceful and sweetly scented haven.

Visiting Marrakesh many years later, I found just such a place – not as you might imagine, in the old medina – but in the Nouvelle Ville built during the French period of administration in Morocco. Set in a high rose-pink wall was the door of my imagination, and while only steps from busy souks, inside was a thousand miles from the madding crowd of faux-guides and salesmen.

Carrying a basket of lycra cycling shorts, a final persistent tout had followed me along the Avenue Yaccoub el Mansour, imploring me to spend my dirhams.

“Pour votre mari madame, pour votre fils!” he cajoled, until eager to be left in peace, I told him my husband was dead and unfortunately so too was my son, and that as a middle-aged woman, I had no use for such apparel.

Following a dramatic pause, he pulled a Rolex out of his pocket but I was already pushing open the door of my childhood fantasies.

Inside I found myself in a lush oasis of still pools surrounded by exuberantly growing plants –groves of bamboo, banana trees and date-palms, hedges of golden lantana, pink and scarlet bougainvillea, cascades of pale blue plumbago and lilac wisteria. Every shade was represented yet the overall colour was blue: not the turquoise of Moroccan ceramics, but a rich cobalt blue covering pavilions, pergolas, pots, and poolside structures and known as bleu Majorelle.

The original plot was created by the late nineteenth French artist Jacques Majorelle who travelled widely in a quest of beauty before settling in Marrakesh. An enthusiastic botanist, Majorelle made frequent trips into the nearby Atlas mountains to collect plants for his little paradise on the hot red plains and as his interest developed, he exchanged specimens with green-fingered colleagues in other parts of the world. Plants from five continents now flourish among indigenous species.

When Majorelle died in 1962, his widow sold the garden, but subsequent proprietors allowed it to become overgrown until the late fashion designer Yves Saint Laurent and his partner Pierre Berge, purchased it in 1980 and began reclaiming it from wilderness.

Although La Majorelle lies in the middle of urban Marrakesh, inside its walls you are close to nature. I glimpsed a chameleon sunning itself on a branch, while a large green frog sat motionless on a lily-pad. The garden hosts some fifteen species of birds attracted to its water and greenery. Resting on a bench beneath fragrant jasmine, I heard the trill and coo of bul-buls and turtle-doves and a gardener, on seeing my interest, explained you can sometimes catch the magic warble of a nightingale.

Majorelle’s former studio has been converted into a small museum housing Moroccan arts and crafts. These include silver jewellery worn by Saharan tribes, Berber rugs woven on hand-looms in the Atlas, woodwork and ceramics from the personal collection of YSL whose ashes were scattered in the garden following his death in 2008.

Australian photojournalist and author. Used London as a base for nearly forty years while freelancing in the Middle East, Arabian peninsular, Africa and South Asia. Have written and illustrated more than a dozen books and travel guides. Operates a well regarded religious images stock photo library: www.worldreligions.co.uk. Live in Leura in the Blue Mountains outside Sydney.
View all posts by Travels with My Hat →
This entry was posted in Travel and tagged Gueliz, Majorelle, marrakesh, museum, nature, oasis, plants, tourism, YSL. Bookmark the permalink.