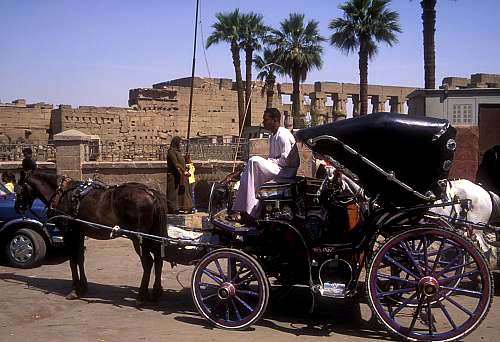 Sightseeing by traditional horse carriage is a pleasant way to explore the popular city of Luxor, in Upper Egypt. For around £1 GBP, you can clip-clop along the Nile where tall-masted feluccas are moored between the massive monuments of Luxor and Karnak.

Spending a little more, buys you an hour’s circuit of the dusty backstreets, passing perfume and spice shops, tailors and crafts stalls selling alabaster busts of Queen Nefertiti, onyx statues of Anubis, and other Pharaonic gods.

I went to Luxor to photograph the Coptic spring festival of Shemen Nessim. Placing my camera bag up on the carriage, I stepped onto the metal foot-plate, but it came down on my legs, slicing them to the bone. The accident required emergency surgery in Luxor International Hospital, but while my injuries were serious enough (I had to have a further operation in London) they could have been worse.

“I advise tourists not to take caleche,” a Luxor tour rep told me. “You see families, with their kids perched next to the driver, galloping along the corniche and on rounding a corner, they are often thrown off.”

Egyptian Tourist Police are attempting to crack down on the scores of illegal caleche waiting outside Luxor’s tourist hotels. Brought in from the countryside by poor fellaheen, hoping to make a fast buck, most are unroadworthy. As I discovered.

If you do take a caleche, check it displays a yellow license plate on the rear, confirm that the driver really does know where you want to go, and don’t allow him to use his whip.

Australian photojournalist and author. Used London as a base for nearly forty years while freelancing in the Middle East, Arabian peninsular, Africa and South Asia. Have written and illustrated more than a dozen books and travel guides. Operates a well regarded religious images stock photo library: www.worldreligions.co.uk. Live in Leura in the Blue Mountains outside Sydney.
View all posts by Travels with My Hat →
This entry was posted in General and tagged accident, caleche, Egypt, horse carriage, Luxor, monument, photos, sightseeing, Travels with My Hat. Bookmark the permalink.