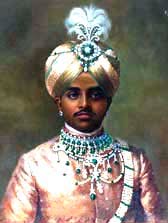 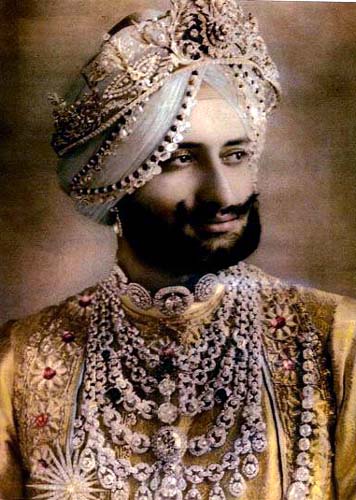 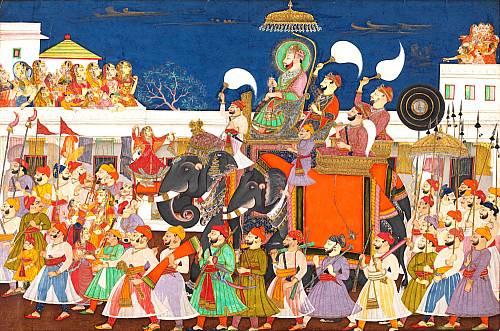 Maharaja – The Splendour of India`s Royal Courts – at the V&A Museum in London, is one of the most exciting exhibitions ever mounted in UK. The word `maharaja` literally Great King, sums up the magnificence of the display which runs until 17th January 2010.

Covering the period from the collapse of the Mughal Empire in 18th century to the end of British rule in 1947, the exhibition examines the changing role of the maharajas in an historic and social context, and looks at how their patronage of the arts resulted in splendid commissions, designed to enhance their status.

The Queen has also loaned dazzling gifts such as the gold sword and scabbard encrusted with emeralds and diamonds, presented to the Prince of Wales by the Maharaja of Kashmir, in 1864. A gold durbar set, for offering paan, a gift from the state of Mysore in 1875, is also on loan courtesy of Her Majesty.

The exhibition unfolds with a simulated royal procession of a life-size elephant adorned with jewellery and surmounted with a silver howdah. An early movie, whose soundtrack features drumming and the screams of the processing elephants, indicates the pomp and ceremony of such an event.

The initial displays explore the role of the maharaja as military and political ruler and artistic patron. Symbols of kingship include a gaddi (throne) from Udaipur, elaborate turban jewels, ceremonial swords and a gold ankus (elephant goad) set with diamonds.

There is a palanquin from the court of Jodhpur used to carry the Maharaja’s wife and women`s dumbells, inlaid with ivory, indicate the activities of the zenana. A chaupar set with enamel dice, inlaid with diamonds and played on a cloth sewn with emeralds, rubies and pearls, is evidence of how leisure hours were spent.

Other dazzling items are the golden throne of Ranjit Singh,`The Lion of Punjab` crowned Maharaja in 1801, and his belt, studded with pearls, diamonds and emeralds the size of Ferrer Rocher chocolates.

The exhibition ultimately looks at the period of the Raj, explored through large-scale paintings such as the Imperial Assemblage – 7.2 metres in length – and rare archival film footage of the royal durbars, including the Coronation Durbar of 1911, attended by George V and Queen Mary.

The final section, explores European influence on the Maharajas where the bejewelled elephant, carrying a dancing girl on its tusks, is usurped by a Rolls Royce Phantom commissioned in 1927 by the flamboyant Maharana Bhopal Singh of Mewar.

Australian photojournalist and author. Used London as a base for nearly forty years while freelancing in the Middle East, Arabian peninsular, Africa and South Asia. Have written and illustrated more than a dozen books and travel guides. Operates a well regarded religious images stock photo library: www.worldreligions.co.uk. Live in Leura in the Blue Mountains outside Sydney.
View all posts by Travels with My Hat →
This entry was posted in General and tagged displays, elephant, jewels, London, maharaja, museum, paintings, photos, procession, Raj, royal, sword, turban. Bookmark the permalink.