My list of memorable drinks runs from coffee in a Bedouin tent to pineapple crush under Polynesian palms. While most were genuine thirst quenchers, others were significant for the occasion. Or the surroundings.

I recall a tangy limoonada (freshly pressed lime-juice and 7 Up) in Iran. I’d been taking pictures of Persepolis, the ancient Persian capital, following my guide – an energetic man named Mr. V. Piroozi – up stairways lined with Achaemenian bas-reliefs, under soaring arches, into vast audience rooms and along columned halls. Finally I leant against a winged bull – one of the guardians of Persepolis – and declared I was parched. Loosening his tie, Mr. V. Piroozi agreed it was time for a drink and muttering that it was fortunate it wasn‘t Ramazan, he drove at speed to my hotel.

In air-conditioned surroundings I slumped in a chair and listened to the tinkling of ice in a glass. Outside the temperature passed 40c as inside, Mr. V. Piroozi and I ordered a second, and then a third limoonada.  Until the hotel ran out of limes. 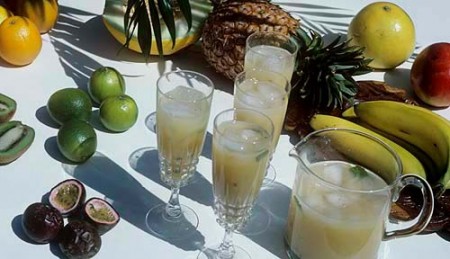 On another warm, if emotional occasion, I discovered horchata while waiting for a train in Spain. A refreshing drink based on almonds, it raised my spirits after my boyfriend – a celebrated matador – had announced plans to marry his childhood sweetheart.  Devastated, I  headed for the station, and to this day I still associate horchata with memories of the bullfight and the hiss of steam, as slowly, interminably it seemed at the time, we pulled out of Barcelona.

A third memorable drink was on the Polynesian island of Moorea. I was cycling around the island when my companion – a young Tahitian – pulled off the road and shinned up a palm.  Knocking off a coconut, he slid down again and holding it between his knees, he chopped off the top with his machete. Cupping it in my hands I let the sweet fluid flow over my face and into my mouth – then I dived into the blue lagoon to wash it off.

The interesting aspect about these drinks is that none of them contained alcohol and leafing through my notes on other memorable beverages, I find  neither do they.

Today even supermarkets stock tropical fruits so why not try mixing your own? All you need is a juice extractor, or a blender, and with a little experimentation you can create wonderful beverages without the need of alcohol to make them taste better.

Here is a starter to your own inventions:

Slice almonds and crush in a coffee grinder.  Add  to a food processor with other ingredients and work until smooth. Strain through muslin to remove any solids. Chill well and serve garnished with a cinnamon stick and a rose petal.  Serves: 4 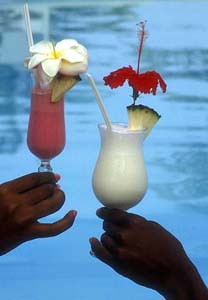 Australian photojournalist and author. Used London as a base for nearly forty years while freelancing in the Middle East, Arabian peninsular, Africa and South Asia. Have written and illustrated more than a dozen books and travel guides. Operates a well regarded religious images stock photo library: www.worldreligions.co.uk. Live in Leura in the Blue Mountains outside Sydney.
View all posts by Travels with My Hat →
This entry was posted in Food and tagged beverages, coconuts, drinks, fruit, horchata, pineapple, recipes, tropical. Bookmark the permalink.