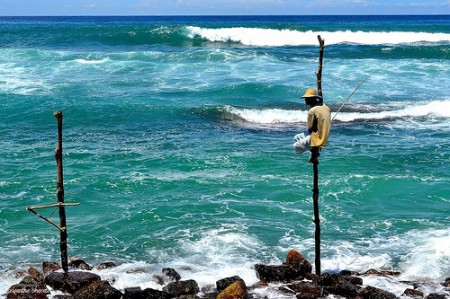 Unique to Sri Lanka are the stilt fishermen of Weligama, a pimple sized settlement on the island’s palm-lined derriere, roughly 100 miles south of capital, Colombo.

It is a thrilling sight when driving along the coast to come upon a group of them perched on poles and flicking their rods in and out of the surf.

The remarkable thing about the stilt fishermen is that they don’t use any bait. A tenacious local fish like a small herring, or a sardine, bites on a bare hook and is whipped up and dropped into a bag: the best fishermen can catch as many as fifty in an hour. 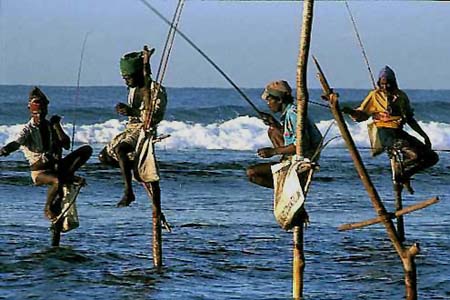 Stilt positions are passed down from father to son and good sites are highly coveted. Jammed into the reef, the poles protrude about ten feet at low water when the men wade out and climb up to fish the incoming tide.

Their only equipment is the cane rod and a hook tied on a length of line. Being constantly drenched by spray means that dress is also minimalist – a turban, a g-string and the odd T-shirt donated by a tourist who was grateful for the picturesque photo opportunity. 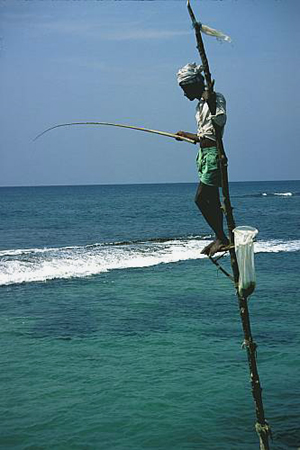 Australian photojournalist and author. Used London as a base for nearly forty years while freelancing in the Middle East, Arabian peninsular, Africa and South Asia. Have written and illustrated more than a dozen books and travel guides. Operates a well regarded religious images stock photo library: www.worldreligions.co.uk. Live in Leura in the Blue Mountains outside Sydney.
View all posts by Travels with My Hat →
This entry was posted in Culture and tagged Ceylon, coast, fishermen, fishing, pole-fishing, Sri Lanka, stilt-fishing, tropics, Weligama. Bookmark the permalink.

One Response to MINIMALIST FISHING