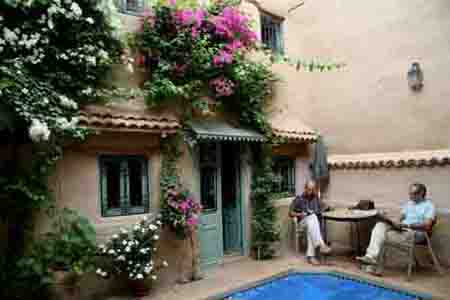 A restored riad in Taroudant medina

On a recent visit to Morocco to write about real estate, I nearly ended up buying a house!It was a lovely old-style village house, completely renovated, with 3 BR, living, dining, patio-garden and swimming-pool. Price EUR120,000 (approx. £95,000).

The property was on sale in Taroudant, a quiet Berber market town in the Souss, the long valley extending inland from the Atlantic coast to the Anti-Atlas mountains.

While the popular resort of Agadir is only 40 miles distant, Taroudant has never really caught on with tourists. Why? Largely because the town itself is dry. There is no nightlife, and while its ramparts are among the best preserved in Morocco, there are no big monuments to catch the eye. Tourists either visit on a day-trip, or rush through it en route to the Sahara.

Taroudant is how I remember Marrakesh sans touristes in the sixties. The pace is slow, people shop in traditional souqs, and in spring the entire town is bathed in a scent of orange blossom from surrounding orchards.

“Taroudant is a magic place. Only 3-4 places in the world have the same effect,” says Sibyl de Beaufort, one of the first to buy and convert a house. In fact she bought two houses. The second was demolished to provide a swimming pool for Dar-el-Hana, her lovely riad tucked away in a corner of the medina.

Unlike Marrakesh whose medina numbers nearly 1000 foreign-owned riads, properties for sale in Taroudant are located in outlying douar (villages) whose owners are moving into modern flats. Rather like farmers do in rural France.

Leading local agent Immobiliere Taroudant has 300 such places on the market priced from from EUR42,000 (£37,000). Clearly they require renovation, but labour is cheap. A skilled artisan costs only £12 a day. A handyman less. And everything from tiles to taps (and alcohol!) is available in Agadir.

Until now buyers are mainly middle age, middle class French looking at retirement. Or as an investment. The first five years are tax exempt after which tax is levied on the annual rental value. If sold within five years, capital gains tax is charged at 20% of profit and while values have slipped 20-30% in Marrakesh, 15% + is guaranteed in Taroudant. I heard of one man who bought a village house for EUR 15,000, did nothing to it, and sold it 8 months later for more than double this price.

One of the most ambitious projects was tackled by Marc Caburet, a former pastissier from Lausanne, who has transformed 4 acres of land into Dar Zitoune, a superb rural-style riad whose 12 de-luxe bungalows stand in gardens of fragrant plants, fruit and olive trees.
The bone-dry climate of the Souss is ideal for gardeners and arthritis sufferers will feel in heaven on earth.

My advice is to leave your glucosamine behind and take advantage of current bargains. A select group of property owners includes Farah Diba, former Imperial Empress of Iran, who owns several houses in Taroudant and surroundings.

Australian photojournalist and author. Used London as a base for nearly forty years while freelancing in the Middle East, Arabian peninsular, Africa and South Asia. Have written and illustrated more than a dozen books and travel guides. Operates a well regarded religious images stock photo library: www.worldreligions.co.uk. Live in Leura in the Blue Mountains outside Sydney.
View all posts by Travels with My Hat →
This entry was posted in Travel and tagged Agadir, Dar Zitoune, immobiliere, investment, Morocco, property, real estate, riad, Taroudant. Bookmark the permalink.