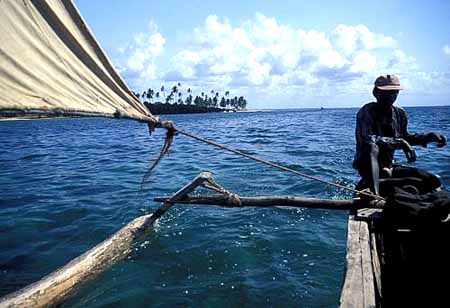 Mr.Juma is an octopus fisherman living on Mafi’a Island, a low, coralline island lying in the Indian Ocean off Tanzania. To support his family, he earns a few shillings by taking the occasional tourist out in his wooden pirogue.

The sign – Traditional Fishing Trips – caught my eye at Kinasi Lodge where I was staying on Chole Bay. Excellent, I thought. A little local colour will be perfect for photography and returning to my bungalow, I prepared for the adventure.  Unwilling to risk both my cameras on the water, I decided to take only one, and conscious that Mafi’a is a conservative Muslim society, I chose an extra large T-shirt to wear over my bikini.

At precisely ten next morning, a lateen sail appeared on the horizon and borne across the bay on a light breeze, a traditional ngalawa pulled up on the sand.

Wearing a faded blue cap, a ragged shirt and brown trousers rolled up to his knees, Mr Juma jumped out and said ‘Jambo and how much are you going to pay me?’ All in a single breath.

‘2000 shillings, or no trip,’ I said rather embarrassed at having to bargain for my day on the water.

Taking my camera-bag, he strung it on a mangrove pole between the gunwales. I stepped delicately in, turned to wave at no one in particular, a puff of wind caught the sail, and we were off.

Recorded in Ptolemy’s Geography written nearly 2,000 years ago, the ngalawa, is still used for fishing off the Swahili Coast of Africa. About 12 feet long, it has a plank fore and aft, where we sat facing each other with my camera-bag swinging in the middle.

Gripping the tiller with his big toe, Mr.Juma extracted a plastic packet from his shirt pocket and carefully removed one of three cigarettes. Scraping a match along the side of the boat, he lit up and sat back as we skimmed across the bay, sending schools of flying fish skipping across the surface.

After travelling half a mile or so, narrowing his eyes, Mr.Juma peered over the side. Evidently satisfied he was on the right spot, he lined us up with a distant atoll, sucked a final drag of tobacco and spat out the butt. Then crawling past where I crouched on the narrow plank, he heaved a coral-stone anchor overboard. Is Mama going in he asked?

‘N’dio,’ I uttered my only word of Swahili. ‘Pictures first, then maybe…….but words failed as Mr.Juma had removed his trousers and wearing only faded red underpants was busily cleaning his mask.

The sight of fishermen in scanty wearing apparel is not an unfamiliar sight in Africa, but Mr.Juma was something else. That he had a big lunch-box was putting it mildly: Mr.Juma was the size of a Zanzibar chest! Legs splayed he sat checking his equipment: a stick for extracting octopus and a wire for spearing them through the head.

Confronting such a spectacle, I lowered my eyes and on finally looking up, I discovered Mr.Juma had disappeared.

The narrow ngalawa was tremendously uncomfortable, but by standing on the centre board with an arm hooked around the mast, I felt able to operate my camera without falling in.  It was ideal weather for photography. A fish eagle floated in the air currents, and a dhow heading for Dar es-Salaam, tacked back and forth on the horizon.

As it grew hotter, I scrutinised the boat. Hewn from muninga wood, it floated high and steady in the water. If you do go in, I told myself, it is unlikely you will get back without a helping hand. 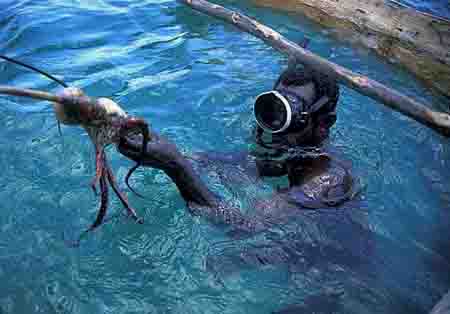 At this moment Mr.Juma popped up with an octopus struggling on his prong. Pausing to turn it inside out, he banged it on the gunwale and it slid into the pirogue. Soon a second victim was chucked in. Then another. And after an hour of sitting up to my shins in octopus, I was dying to go for a swim!

Taking a breather a Mr.Juma hauled himself up in a wet costume, now even more revealing. I was paying him 2000 shillings, wasn’t I going in, he wanted to know?

‘N’dio,’ I replied, tying up my hair and pulling on my mask.

‘Nice mask,’ Mr.Juma gestured. ‘Bet it cost a lot,’ he added and somersaulted over the side.

Dropping into the lagoon, I marvelled at the underwater life. Blue parrotfish drifted around a stag-horn coral and a school of silver jack rose and fell in the outgoing tide.

Mr.Juma paid no heed. With a family of five to feed, spearing octopus was a necessity and swimming strongly, he stroked over the reef poking his stick into every nook and cranny.

I tried to keep up, but he was much too fast, and on raising my head, I saw I was practically in the open ocean. The bay was barely 15 feet deep, but fearful of a lurking shark, I took off swimming for my life. But it was as I’d suspected. I could not haul myself up onto the ngalawa and hanging off the side, I expected to lose a foot at any moment.

After what seemed an eternity, Mr.Juma swam up dragging a string-bag of octopus trailing sepia ink. ‘You’ve hardly been in,’ he spluttered in a mixture of Swahili and English. ‘Do you really want to get out? ‘

‘N’dio!’ I said. At my age I did! Ten years ago it would’ve been easy, I muttered as he hauled me on board.

Safely back on Mafi’a, but haunted by Mr.Juma’s pants, I set off for the market where traders helped me search through a mountain of second-hand clothes for a decent swimming costume.

The problem was that I could not make them understand they were not for my husband, but for a fisherman living near Kinasi, I heard myself shout! And when one youth, held up a pair of Y-fronts, I discarded the idea and instead bought a fishing line at the island store.

I did not encounter Mr.Juma again, but I left 300 yards of 30lb breaking strain and ten 6/0 hooks at reception. I felt this would be more useful than a decent pair of shorts and the likelihood of another middle-aged woman going octopus fishing seemed remote. 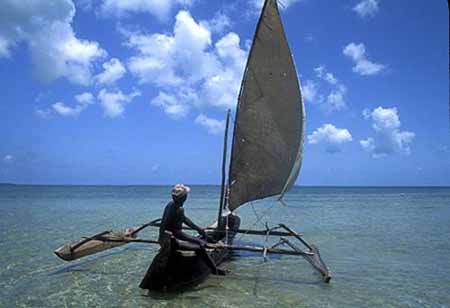 Australian photojournalist and author. Used London as a base for nearly forty years while freelancing in the Middle East, Arabian peninsular, Africa and South Asia. Have written and illustrated more than a dozen books and travel guides. Operates a well regarded religious images stock photo library: www.worldreligions.co.uk. Live in Leura in the Blue Mountains outside Sydney.
View all posts by Travels with My Hat →
This entry was posted in Travel and tagged East Africa, fisherman, fishing, Indian Ocean, lateen boat, Mafia, ngalawa, octopus, pirogue, sail, Tanzania, travel. Bookmark the permalink.

4 Responses to MR. JUMA’S LUNCH BOX – was the size of a Zanzibar chest!