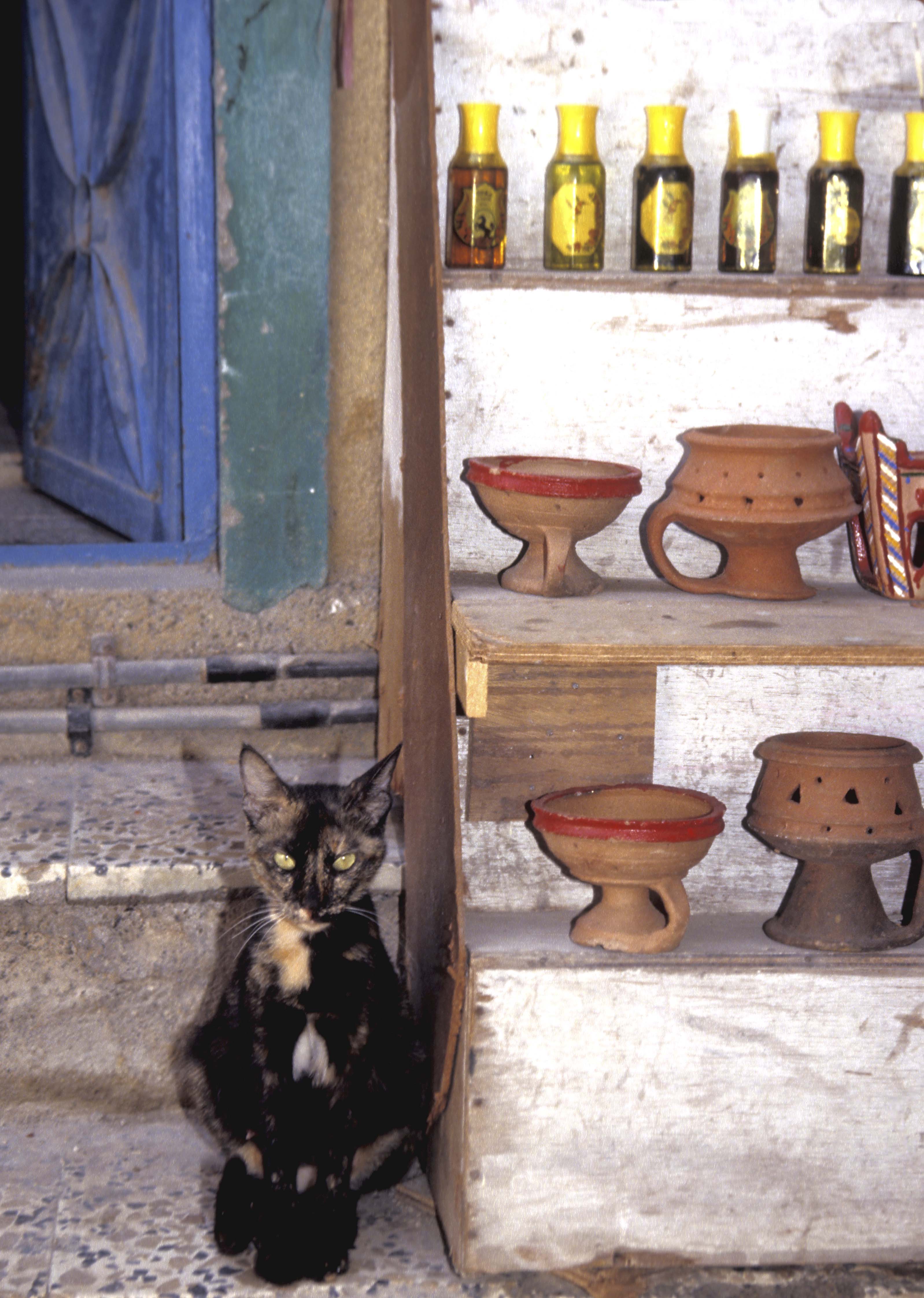 A tourist, seeing the cat sitting outside the incense shop, called him Frank. After frankincense. But the cat took no notice. Having sat on the steps of the shop for fifteen years Aziz – for this was his real name – was indifferent.

Another wag – Aziz thought he might have been British – suggested a good name for him was ‘Muscat’. Mus-Cat. Geddit? But Aziz thought this pathetic as Muscat, the capital of Oman, lay in the next bay. He lived in Muttrah, port area, fish market and bazaar, so the man had just made a fool of himself.

Aziz bin Sultan al-Hamra, to use his full name, was a part-tortoiseshell cat of origins obscure. His very pointed ears lent credence to a suggestion of possible royal descent. Had his ancestors patted softly around the Queen of Sheba’s palace?

The ‘bin’ means ‘son of ‘ — Sultan — a right roue of a cat whose base was the fish market.

Sultan had lived to a great age, fed each day on sardines and tuna scraps from the Arabian Sea. His mother was unknown, a mystery cat who had delivered three kittens behind the mosque. There were very few cats in Oman. Perhaps she had once been a feral cat whom Sultan had met on his nightly strolls.

A Danish embassy wife on seeing the kittens had taken them home. But only Aziz had survived. And when the Danes were posted to Cairo, their driver took the kittens to his brother who owned the incense shop in Muttrah souq.

And there the kitten stayed. From an early age he took to sitting on the step watching passers-by. He never did anything beyond watch. It wasn’t necessary. And as the only cat in the bazaar he was well looked after.

Old Mohammed who sold canes, ropes and other rustica brought him titbits from the fishing boats. Fatima who lived in one of the waterfront houses put milk in a lid as she passed.

The man who owned the incense shop did nothing, but Aziz felt this was fair as he allowed him to sit on the step. Rents were expensive in the souq: if he had to pay for a space on the step…perish the thought.

And why the incense shop? He could have sat outside the halwa shop or the money-changer’s. But no. He liked the fragrance of burning resin, sandalwood and aloe, but especially the silvery beads of frankincense.

He liked to sit on the step and inhale, imagining himself in the Queen of Sheba’s palace. With servants to brush his coat and clip his claws. 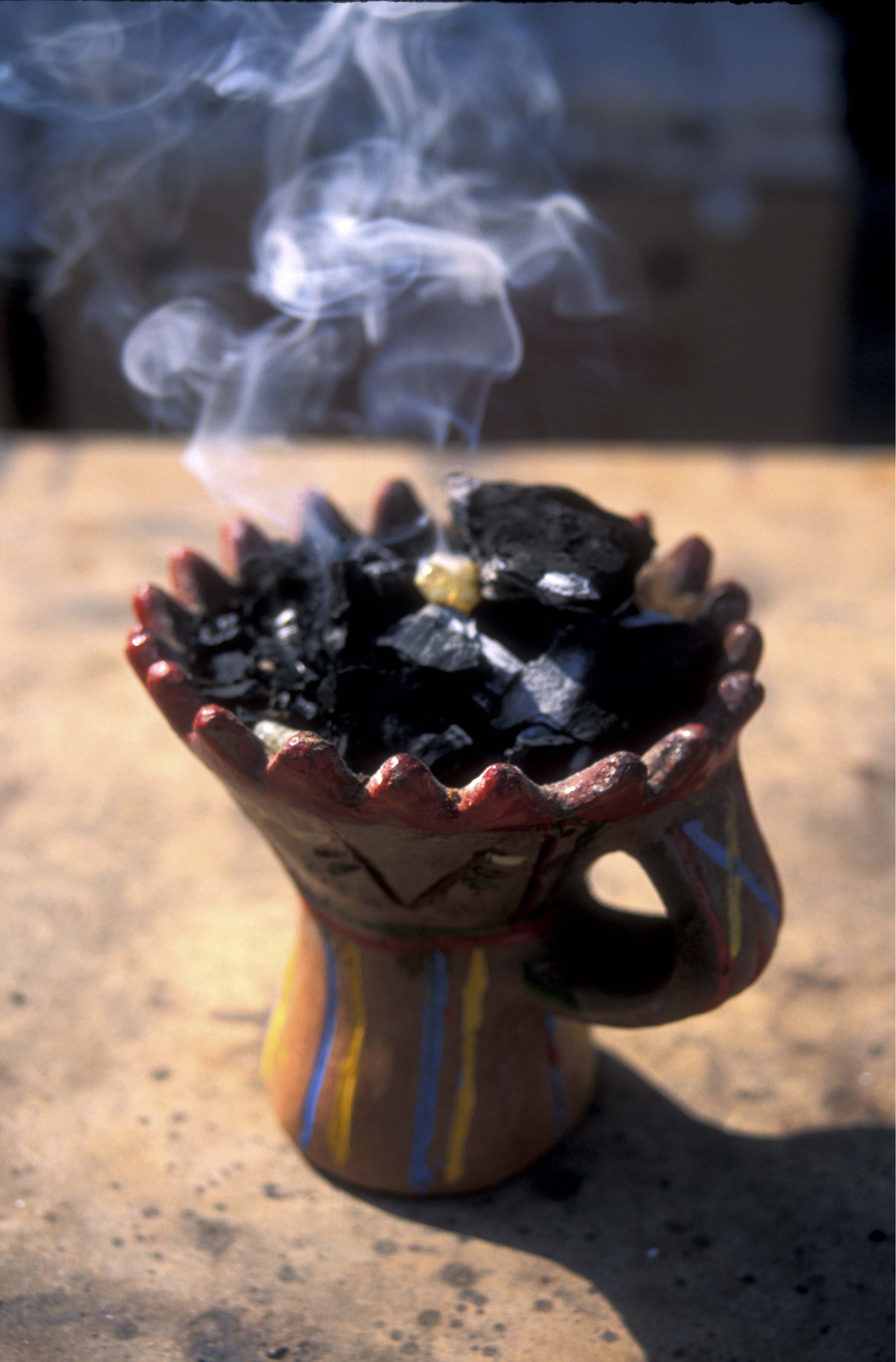 Image from: www.copix.co.uk
Aziz sitting on the step in the souq.

Australian photojournalist and author. Used London as a base for nearly forty years while freelancing in the Middle East, Arabian peninsular, Africa and South Asia. Have written and illustrated more than a dozen books and travel guides. Operates a well regarded religious images stock photo library: www.worldreligions.co.uk. Live in Leura in the Blue Mountains outside Sydney.
View all posts by Travels with My Hat →
This entry was posted in General and tagged cathedral, frankincense, incense, Muscat, Muttrah, Oman, souq, women. Bookmark the permalink.