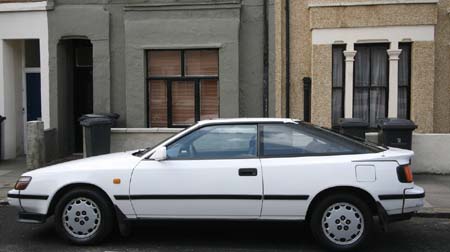 I owned a Toyota Celica coupe for 15 years during which time, it never caused a problem, but even though it passed the emissions test, unfair UK government charges on a GT – saw me finally decide to call it a day.

I contacted a salvage company which offered £70 to remove and crush it for scrap, but deciding on a last attempt at selling it, I placed an advert in a British Classic Car magazine. Then I went off to Marrakesh and forgot about it.

On my return to London, there was an anxious message on my answer phone. An Indian man was desperate to buy it to participate in a  Top Gear  “Pimp My Ride” motor challenge. The criteria was that the car shouldn’t cost more than £500 to buy and it had to have a valid MOT and tax disc.

That evening, he came around and bought it on sight. We performed a Hindu ceremony when I held a “sacred coconut” under a wheel and he drove over it, crushing it, to bring good luck.

With only 77,000 miles on the clock, apart from a trip to France, for many years the old Celica had only been driven to Sainsbury’sa  supermarket (¼ mile) for a weekly shop.

Now, to prove old cars still have life, it had to survive being driven from John O’Groats (in the north of Scotland) to Lands End (the most southern tip of England), a distance of 874 miles, with other old competitors, including a Porsche.

It was not a race, but an endurance test, and although my dear old car coughed and spluttered, it was declared the eventual winner, raising £8000 for charity in the process.

But this was not the end. So close to being crushed, it was auctioned for charity after the trip, and bought by a woman who declared she loved the model, and would restore it as a classic car.

It’s a nice story amid Toyota’s current woes. My desk overlooks the street where it used to be parked. At times I believe I can see it.

Australian photojournalist and author. Used London as a base for nearly forty years while freelancing in the Middle East, Arabian peninsular, Africa and South Asia. Have written and illustrated more than a dozen books and travel guides. Operates a well regarded religious images stock photo library: www.worldreligions.co.uk. Live in Leura in the Blue Mountains outside Sydney.
View all posts by Travels with My Hat →
This entry was posted in General and tagged carriages, Celica, challenge, charity, christinebosborne, coconut, drive, London, Top Gear, Toyota, Toyota Celica GT, Travels with My Hat. Bookmark the permalink.

6 Responses to MY DEAR OLD CELICA