Many years ago, wanting to break the long flight from Sydney to London, I decided to stop in Goa, on the west coast of India. The Oberoi Hotel at Bogmallo Beach had been a comfortable base and while Goa was delightful, the stop-over was not as restful as I’d anticipated.

My first mistake was not to fly to Goa, but in Bombay I had caught the night bus, a 17-hour journey taking longer than our flight from Down Under, but only the start of encounters with local transport. 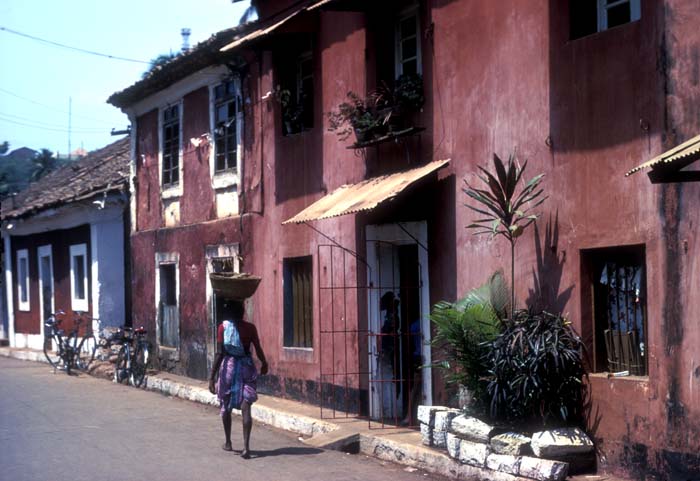 The former Portuguese colony is best known for the great Bom Jesus Church enshrining the body of Saint Francis Xavier, canonised by Pope Gregory XV in 1622. Ancient churches, forts, paddy-fields and palm fringed beaches were other attractions, but sightseeing was a challenge, if not a veritable expedition.

In daily sorties from the Oberoi, I had travelled on 21 buses, 5 punts, two motor-scooter taxis and a taxi-cab. Now ready to depart, to avoid returning overland to Bombay, I had booked a passage on one of the old Mogul line steamers plying the Malabar Coast.

“Goa-Bombay 24 hours,” said the agent handing me a one-way ticket on the 2000-ton Konkan Shakti. Perfect, I thought. I will arrive rested, with ample time between 8am when we dock and my London flight, at 12.20 midnight.

Awaking early, I ate a final mango and enjoyed a shower. The stage was set for a peaceful departure although I still had to catch three buses to reach Panjim, Goa’s mellow old capital on the Mandovi river.

I knew the Bogmallo bus left at 7am because I’d seen it on morning walks.  Today the receptionist declared it came at 7.15 am, but the night porter disagreed. The first bus to Panjim goes at either 7.30 or after 8.30 depending on when the driver finishes breakfast, he told us.

As I waited outside the hotel, a passing fishermen added his own version of the timetable. The bus definitely went at 7.45am because I send my fish on it, he insisted. Urgent honking proved everyone wrong when pouring smoke, the bus roared up at 8.15. 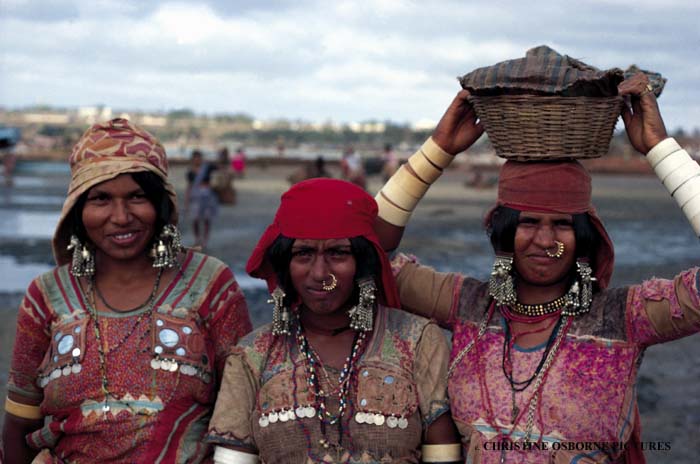 Throwing my backpack on the roof, I found a seat between two Raponkar women  nursing baskets of  prawns. Barefoot, they wore red scarves, gold nose-rings and floral-patterned saris. I was in sandals, a denim hat, blue shirt and white linen shorts pressed especially for the trip by the Oberoi laundry.

Bumping along the road we reached the old commercial port of Vasco da Gama for our first change. This bus was full, but thirty passengers off our bus managed to squeeze on where a sign said: 19 Standing Passengers Only.

At the Zuari river I jumped off to board a punt. I had made this journey several times during my stay, but today the motor failed in midstream. 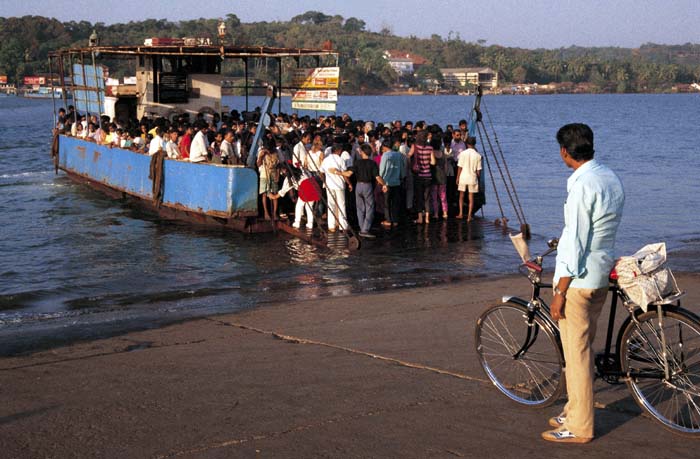 I imagined a small paragraph in the Daily Telegraph — Seventy Goans and one tourist, believed Australian, washed out to sea, but just as abruptly as it had stopped, the engine sputtered to life and on reaching the far side, we leapt off  and  rushed for bus number three.

The dock in Panjim was packed with passengers and stacked with mountains of baggage and the only foreigner in my clean white shorts, I retreated into a café for a cup of tea.

Just as it reached my table, everyone stood up, grabbed their belongings and charged out —the Konkan Shakti had arrived and dropping anchor, she swung round on her chain and hit us with a stench of urine.

As soon as she was close enough to the quay passengers swarmed off like ants. Cabin trunks, bicycles, school desks and a sewing machine were handed down and trussed crabs, bags of rice, boxes of mangoes and bed rolls were handed up. 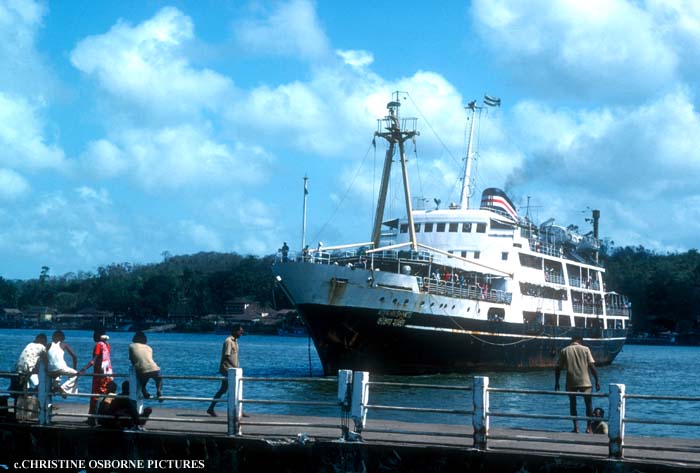 Joining passengers rushed up the gangplank, but I followed a statelier group using stairs to the Upper Deck where a uniformed officer examined my ticket and located my cabin, starboard, aft.

Clean, if basic, it had a red plastic rose stuck in the mirror and a picture of Gandhi on the wall. Shutting the door, I switched on the fan and collapsed on my bunk as hooting mournfully the Konkan Shakti slipped downstream and out to sea.

At Fort Aguada, we set a course due north. I sat in a deck chair reading and looking up to wave at the occasional fishing boat. I reflected it was likely that neither our Captain, nor even God himself knew the number of passengers, but we were twenty Upper Deck, all Indian except myself, feeling vaguely like Dame Peggy Ashcroft in the circumstances.

At three o`clock we heaved to off Deogad, one of four obscure ports of call along Goa’s 65-mile coastline where more passengers were rowed out in long-boats. Afternoon tea was wheeled out at four and at five o’clock, to my great astonishment, a loudspeaker announced a game of “Housie-Housie”. 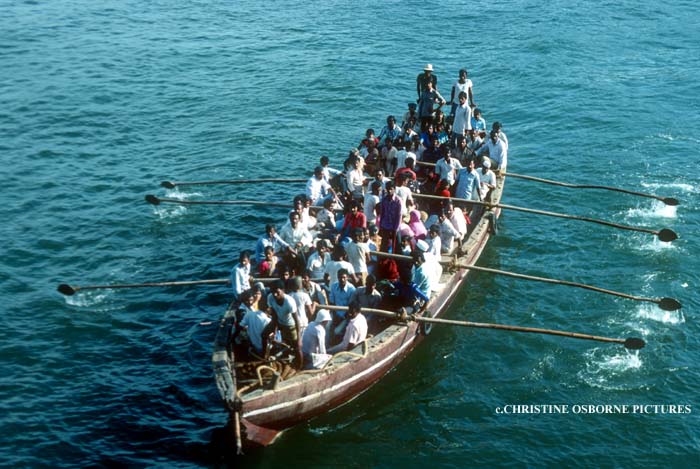 Dinner of mulligatawny soup, chicken curry and bread and butter custard was served at seven o`clock and after a stroll around the deck, I retired early in preparation for the day ahead.

Crewmen hawking over the side disturbed me periodically throughout the night and just when I had dropped off to sleep, I was awakened by the falsetto voice of an Indian child singing “Old Macdonald has a farm-Ei-Ei-O`.

Passing the Gateway to India, we nudged into Bombay at 8am, exactly as the ticket agent said. The child`s mother pointed out the bus for passengers in transit to Bombay Airport Hotel where I retrieved my suitcase from the left luggage-room and took out a tracksuit for weather in England described as a ‘severe cold front’ in the Times of India.

The hours passed slowly until 21.00 when I took the hotel bus to the airport only to find my flight, AI 101 was overbooked. 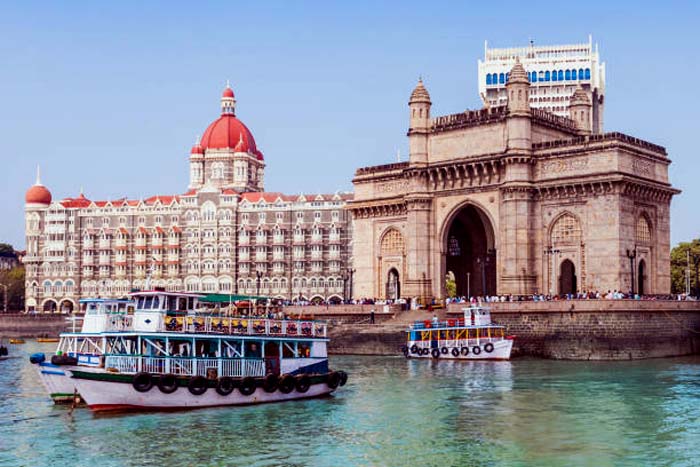 “But we can route you via Moscow to Birmingham,” said the Air India Manager helpfully, but the thought of catching another bus — from Birmingham to London —overcame me and I sat down on my case and smoked a cigarette which you could at the time.

One hour later, airline staff suddenly discovered a seat available. I must hurry up! AI 101 is departing for Delhi, Dubai and London! Last call!

Flopping into seat 51C, I decided to sleep until Dubai where I would get off and buy duty free. But it was not to be when approaching Delhi, we were requested to de-plane taking all our hand luggage.

“What`s the problem?” I asked a steward.

“Captain has message of a bomb on board,” he replied.

AI 101 circled New Delhi for twenty minutes in preparation for an emergency landing, but we set down smoothly and I descended the steps into a ring of fire engines.

We were mothers and babies from Uttar Pradesh, promised brides from Maharashtra, Sikh students en route to Canada, one stretcher case and a grim-faced businessman who had missed a seat on British Airways.

360 passengers off AI 101 filed into the airport and filled orange plastic chairs in Delhi Transit Lounge. Two hours later, given cards for free refreshments, I studied the man making tea.  He dropped fifty tea-bags into a large chrome jug, added a tin of condensed milk, poured in hot water and beat it like a carpet.

Could I have a cup without sugar, I asked quietly?

“All have sugar”, he wagged his head.

“Diabetic, diabetic,” the word was whispered around the transit lounge and after an animated debate in Hindi with interjections in Gujrati and Punjabi, I received a cup of tea, with milk and no sugar, kindly sent over by the bar.

Carrying it carefully to a corner, I peeled a banana from Panjim. Then spreading out The Times of India, I lay down on the floor but crying children and boarding calls made sleep impossible.

Feeling fortunate I was not going to Nepal, I pushed up my eye mask and saw our flight  posted for 10am, so standing up, I stepped over other passengers to go and wash.

The Ladies had been kept clean all night by a woman attendant hurling buckets of water over the lavatories. She handed me some paper, studied me cleaning my teeth and folded my last rupee in the tip of her sari. I was applying lipstick when screams in the transit hall indicated our flight call.

I joined the crush in the departure lounge where we confronted three security women who said they couldn’t check us through because they had lost their rubber stamp.

Distraught middle class Indian memsahibs around me made dreadful comments about bureaucracy and the state of India in general and taking this cue, I told the security women that one must look for their stamp, another should check us in and the third should prevent more women squeezing into the cubicle.

Thankfully it worked and in my warm tracksuit, I stepped out into the searing heat of June in north India. A coach took us out to identify our luggage under a wing, but we sat on board for another hour waiting for passenger Shrivasutra to identify his suitcase.

When he doesn’t appear, we leave it on the tarmac and taxi out for take-off to Dubai and London.

On reaching a cruising altitude of 37,000 feet, the captain apologised for the delay and offered us drinks courtesy of Air India.

A stewardess placed a large cognac on my tray and nine hours later with 29 buses, 6 punts, 2 scooters, a beaten up taxi-cab and a steamer behind me, I landed at  London Heathrow. 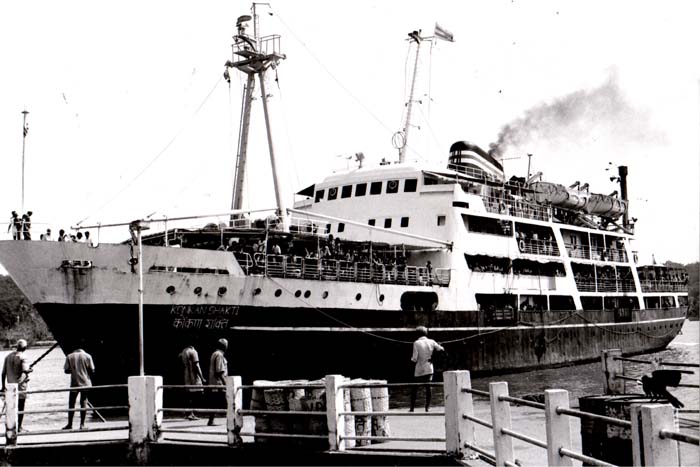 6 Responses to On a Wing and a Wave