Could we bring him a kilo of betelnut leaf? ‘It’s cheaper in India,’ said the Pakistani immigration officer stamping my passport with faded violet ink.

Crossing the Wagah check-point near Lahore can take several hours according to official moods and since I was only visiting Amritsar for the day, I was relieved when formalities lasted just 40 minutes.

I followed my companion, a Pakistani holding British nationality, across ‘No Man`s Land’ to the Indian immigration post. ‘We must not be late getting back.’ he said. ‘The border closes at 15.30 hours, the only guaranteed time on the Sub-Continent.’

In India, vintage taxi-cabs waited to take arrivals to Amritsar – the fare for the 60 km round- trip being around $30. Or at least that’s what I paid. ‘Fixed price,’ said the Sikh driver slamming the door.

We set off motoring through fields of mustard flowers and ripening wheat. Although Punjab is one of the smallest states in India, it produces two thirds of the country’s grain, a major reason for Delhi’s refusal to allow a separate Sikh homeland.

Nearing Amritsar, buses and cars joined the stream of pony-traps and bicycles flowing in from the countryside and sweeping us towards an ox-blood coloured arch where our driver turned and requested we did not smoke since tobacco is anathema to Sikhs.

Amritsar is the city of the Golden Temple. Built by the fifth Sikh Guru, Arjan Dev, it houses the Guru Granth Sahib (sacred scriptures) conferring on it the sanctity of the holiest shrine in Sikhism.

Like Mecca for Muslims, it is the devout wish of every Sikh to visit the Golden Temple at least once in a lifetime. On major festivals such as the birthday of Guru Nanak – the founder of Sikhism in the 15th century – Sikhs pilgrims converge on Amritsar from all over the world.

The Golden Temple has four entrances facing the four points of the compass to symbolise it is open to people from the four corners of the earth. Etiquette requires removing your shoes before entering. You must also wash your feet and cover your head. Any cigarettes in your bag must be left outside with temple guards who watch for any transgressions.

A vast complex of tiered marble shrines and rest-houses, the temple surrounds a sacred tank in which stands the burning gold Darbar Sahib, or Lord`s Court. The illustrious Maharaja Ranjit Singh, known as the Lion of Punjab had the pavillion covered with dazzling gold leaf in I803.

In an upper room, a priest seated under a bejewelled canopy reads the Guru Granth Sahib while slowly waving a white yak’s tail to keep flies off the sacred texts containing the revelations of the ten Sikh gurus.

Walking around the temple, I watched Sikhs of all ages immerse themselves in the tank, their pink and red turbans resembling lotus buds on the surface of the water. After bathing and offering prayer, they lined up for langar at one of the kitchens staffed by volunteers who may serve 50,000 free meals on a busy religious occasion.

My companion and I were fortunate in visiting during a peaceful period, but Amritsar has never forgotten the terrible day in I984 when Indian troops stormed the temple killing the Sikh messiah Bhindranwale together with hundreds of other extremists.

No one was exploding bombs or stubbing out cigarettes on the Golden Temple. We even had time to walk to Jalianwala Bagh, site of the British massacre of Indians in 1919.

Buying the betel nut from a stall in Hall bazaar, we reached the border again just as coolies were carrying the last loads of the afternoon across ‘No Man’s Land.’

‘Were we likely to come again?’ enquired the Indian immigration officer.

I thought it was uncertain, but my Pakistani colleague, a regular visitor to Lahore, was asked on the next occasion could he bring a television?

‘You know our problems with foreign exchange,’ said the Indian, stamping our passports Amrotsar Exit in faded violet ink. 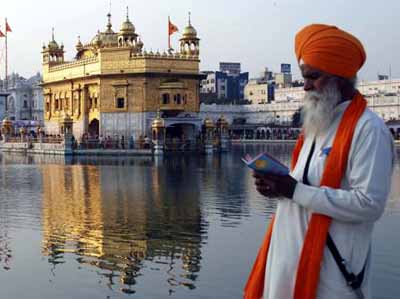 Australian photojournalist and author. Used London as a base for nearly forty years while freelancing in the Middle East, Arabian peninsular, Africa and South Asia. Have written and illustrated more than a dozen books and travel guides. Operates a well regarded religious images stock photo library: www.worldreligions.co.uk. Live in Leura in the Blue Mountains outside Sydney.
View all posts by Travels with My Hat →
This entry was posted in Religion, Travel and tagged Amritsar, border, guru, Guru Nanak, India, nectar, pilgrimage, Punjab, religions, religious, sacred, shrine, Sikh, tank, Wagah, wheat. Bookmark the permalink.

4 Responses to Postcard from Amritsar