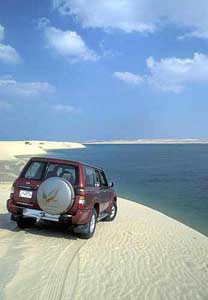 Some of the world`s great natural attractions are sought out by people seeking a deeper meaning to their holiday.
Apart from their spiritual significance, wonders such as Uluru, the great monolith in Central Australia, the Grand Canyon and Victoria Falls -some still worshipped by ethnic peoples – have become famous tourist destinations in their own right.
Khor al-Udeid in the Arab state of Qatar is one of these awesome, mystical places.
Spreading over 12,000 ha, the vast tidal inlet, commonly known as the `inland sea` cuts into the desert from the Gulf coast to form a border with Saudi Arabia. Measuring 12 km from east to west, the khor is a magic region of turquoise channels bordered by soaring wind-blown dunes.
The tides surging in and out the narrow channel sweep up quantities of fish – sea turtles have been sighted far from the mouth – while the undisturbed inland reaches provide a breeding ground for crustaceans.
Significant numbers of wading birds winter in the sabkha – swampy shallows – of the khor. Socotra Cormorant, gulls, osprey and the Caspian tern are sighted while flamingos are occasional visitors.
Commercial fishing was banned in 1993 when Khor al-Udeid was declared an official sanctuary and anxious to preserve its pristine beauty, the government has outlawed all development.
Threats include recreational disturbance by campers and four-wheel drive vehicles but apart from the omnipresent threat of oil pollution in the Gulf, they are currently not serious problems, but require close monitoring.
Khor al-Udeid is 78 km south of capital Doha. Vehicles should drive in a convoy and carry water and spares.
c.Christine OsborneImages: Khor al-Udeid entranceSource: www.copix.co.uk

Australian photojournalist and author. Used London as a base for nearly forty years while freelancing in the Middle East, Arabian peninsular, Africa and South Asia. Have written and illustrated more than a dozen books and travel guides. Operates a well regarded religious images stock photo library: www.worldreligions.co.uk. Live in Leura in the Blue Mountains outside Sydney.
View all posts by Travels with My Hat →
This entry was posted in Travel and tagged 4x4, Arabia, Arabian Gulf, channel, dunes, Khor al-Udeid, Qatar, sand, tourism, Travels with My Hat. Bookmark the permalink.