This is a taster of Chapter 2 — Red Sea Adventure — from my new book Travels with My Hat. Seeking winter sunshine, I had gone back to Hurghada, a small fishing village with one hotel in 1964. I wondered if it was still there… 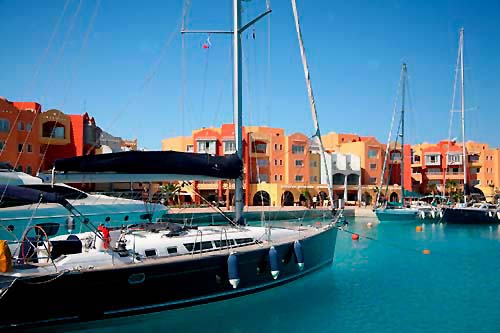 … ‘I want to find the Funduq Sheraton,’ I told my taxi-driver, a young man wearing designer stubble and a David Beckham 7 football shirt.

‘Road closed.’ His brow knitted in the rear vision mirror.

‘Izmi Hurghada thirty years ago!’ I tapped my chest with a certain pride since I had clearly graced Hurghada before he was born. But he was right. The old road was blocked by a rusty, corrugated iron fence plastered with posters advertising an ‘Eid Concert’ at the Ministry of Sound and other extravaganzas for the imminent Muslim feast of sacrifice.

‘Funduq Sheraton!’ he suddenly exclaimed, pulling up beside a crumbling circular building surrounded by leaning lamp posts and dusty trees. Grey, shabby and clearly unloved, I recognised it as the old Red Sea Tours Hotel, a large Marriott which had risen beside it being one of 160 new hotels since my visit all those years ago.

Hurghada’s long main street was still known as Sharia Sheraton, even though a new Sheraton had re-located to Soma Bay, far away from bungee jumping, kite-surfing, glass-bottom boat rides, submarine tours and other entertainments for holidaymakers flocking to the popular Red Sea resort. Wherever I looked there were hotels, cafes and shops selling tourist tat, but a sign, Harrads Hurghada, captured my attention.

On the pavement outside, glass water pipes, brass trays, wooden animals, leather pouffes, and camel backpacks were displayed beside baskets of karkady – the dried red hibiscus flowers that Egyptians make into tea. As I raised my camera to take a picture, an intense looking man who clearly hadn’t shaved for days, got up from a dirty white plastic chair. ‘Everything inside 1GBP,’ he said, holding up a finger. 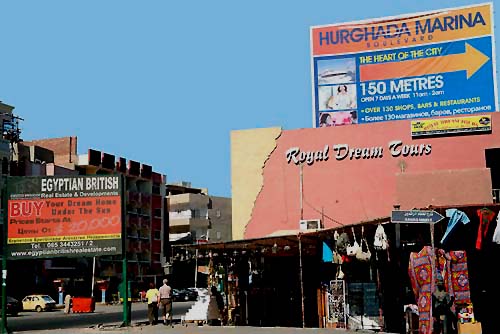 Going into his shop, I picked up a fish from a display of onyx marine life. ‘Fish 4 GBP,’ he quickly corrected himself. Removing the stopper, I sniffed one of the half-filled, urine-coloured flagons of perfume lining a shelf. ‘Perfume 10GBP for100 grams.’ He cleared his throat. Then all of a sudden he flew into a rage.

‘Tourist just lookin’. No buy anythin!’ Flecks of spit appeared in the corners of his mouth as he shouted. ‘Every tourist fuggin Russhin. Old woman wantin sex. Fuggin rubbish. Only lookin! Pay nothin! Russhin Fuggin! Fuggin! Fuggin! Oh Allah! What we do?’

He clasped his hands together and concerned my presence might bring on a seizure, I left him shouting to continue my walk along the Sharia Sheraton.

Every second shop I passed was stuffed with souvenirs. In the window of a leather-ware store, a lizard skin handbag, including the head, half-chewed away by insects, was marked 145 Egyptian pounds. I wanted to buy a plain white T-shirt, but everything had either a shark or a pyramid on it … 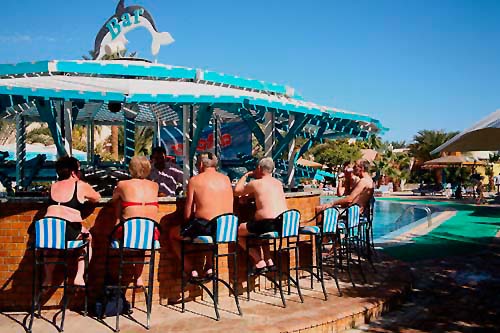 Australian photojournalist and author. Used London as a base for nearly forty years while freelancing in the Middle East, Arabian peninsular, Africa and South Asia. Have written and illustrated more than a dozen books and travel guides. Operates a well regarded religious images stock photo library: www.worldreligions.co.uk. Live in Leura in the Blue Mountains outside Sydney.
View all posts by Travels with My Hat →
This entry was posted in TWMH Excerpts and tagged bar, book, Egypt, holidays, hotel, Hurghada, marina, photos, Red Sea, resort, sea, Sheraton, shop, souvenirs, tourists, Travels with My Hat, yacht. Bookmark the permalink.