From Chapter 6 May you never Be Tired: Travels with my Hat 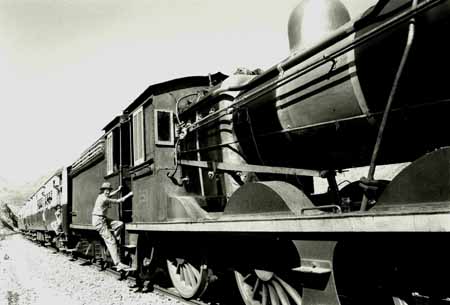 ‘……My introduction to this lawless part of Pakistan was in a Sydney cinema we called the “flea pit”. My father, a big fan of Lauren Bacall, had taken me to see her and Kenneth More in the adventure film North West Frontier with a poster depicting the stars above a picture of the Khyber Mail.

Twenty years on, I was about to catch the legendary Mail,  scheduled to leave Peshawar Cantonment at nine o’clock and to arrive in Landi Kotal, on the Afghan border, three hours later.

My companion was Habib Afridi, a member of the Adam Khel clan within the formidable Afridi tribe whose territory includes the Khyber Agency.

He was a lovely man, tall and softly spoken, and I found it hard to imagine the Afridis had struck such terror in British soldiers stationed on the Frontier. Attacking Landi Kotal in 1897, they had defeated the famous Khyber Rifles, and only a counter-attack by 35,000 British soldiers, was able to retake the strategic site.

For our day out, Habib was wearing a grey *shalwar kameez while I had teamed a floral shirt purchased at the Galleries Lafayette in Paris with khaki trousers. And naturally I was wearing my hat.

But we have not chosen a good day for our journey up the Khyber. It was the start of
Eid-ul-Adha and hundreds of tribesmen were travelling home to walled compounds in remote villages in the Federated Tribal Areas of Pakistan.

Boarding at Jamrud, the gateway to the Khyber, I was swept along in an arsenal of Pathans waving guns, and hawkers brandishing cigarettes, sugar-cane and hard-boiled eggs. Chickens, even a cow, were bundled on board as we pulled out of the station, with me seated in the LADIES ONLY carriage pretending to be Lauren Bacall, and Habib riding in the front locomotive.

Our five carriages were pulled and pushed by two 1920s steam engines; two, because unable to turn in the narrow gorge, the front engine had to run back to gain momentum when the rear one acted as prop. In one place, the ascent was so steep that all the passengers leapt off and scrambled up the hillside, reboarding when we steamed into the station above.

The train traversed 34 tunnels between Jamrud and Landi Kotal, the summit of the pass, and seated in total darkness, with soot pouring in the open windows, I reflected on other rail journeys I have made. The Chittagong Mail in Bangladesh, the Nairobi-Mombasa Night Express and the Indian Pacific crossing of the Nullabor were memorable, but none matched the Khyber Mail for excitement.

In the longest tunnel, a prankster pulled the emergency cord, no doubt to frighten me, the only woman on board, but as we ground to a halt, the joke was on him for at the last stop, I had run along the track to join Habib, and we could see each other by glowing coals in the furnace…..’ 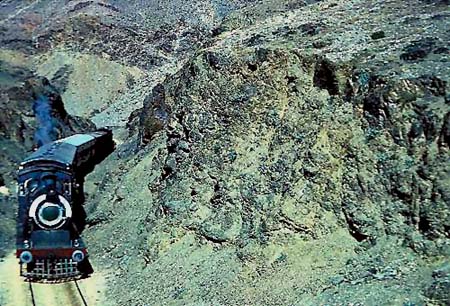 Australian photojournalist and author. Used London as a base for nearly forty years while freelancing in the Middle East, Arabian peninsular, Africa and South Asia. Have written and illustrated more than a dozen books and travel guides. Operates a well regarded religious images stock photo library: www.worldreligions.co.uk. Live in Leura in the Blue Mountains outside Sydney.
View all posts by Travels with My Hat →
This entry was posted in TWMH Excerpts and tagged Afridi, carriages, christinebosborne, engine, journey, Khyber Mail, NWFP, Pakistan, train, transport, Travels with My Hat. Bookmark the permalink.

5 Responses to RIDING THE KHYBER MAIL