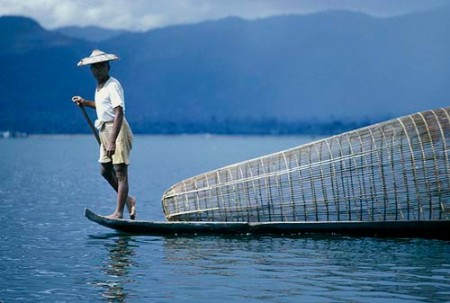 Rowing a boat with your leg is quite a difficult feat, but the leg-rowers of Inle Lake are well balanced men.

Inle Lake lies in in the Shan state of north-east Burma at a height of 880 metres above sea level. The shallow blue lake, covering an area of 116 sq kms, is known for its unique leg-rowing fishermen who are never known to fall overboard.

Known as Inthas, local people numbering about 70,000, live in four towns bordering the lake, in stilt-perched villages around the edge, and on floating islands on the lake itself.

Micro-gardens flourish in the mud beneath their houses where chickens and other livestock forage for food. There are also large floating vegetable gardens made from lashed reeds and anchored by bamboo poles which rise and fall with changes in the water level, and so are resistant to flooding.

The Intha’s basic diet is rice and fish. Fruits and vegetables along with necessities are sold in the ywa-ma, a miniature floating market which circles the lake, visiting all the villages, every few days.

When not cooking and gardening, Intha women weave colourful tote bags which are sold to visitors in the corridor leading to the Phaungdaw-U pagoda overlooking the lake. They also produce hand-woven silk textiles and the cotton longyi, a sarong-type garment worn by men.

Intha men have a constant battle to keep the pagodas above water level as the floating islands on which many are built slip beneath them. Graceful leg-rowers glide by carrying mounds of mud to prop them up. Water hyacinth, a major problem, must also be cleared.

In October a spectacular water carnival takes place when a golden Buddha accompanied by flower-laden hlays is taken in a procession around the lake. Leg-rowing races with 10-12 men, all rowing on one leg to a boat, are a highlight.

With tourism on the rise, the best advice is to visit this special part of Burma before it changes. A luxury hotel with bar, spa and bicycles for hire has already been built on the lake-shore. Access is from HeHo Airport, 35 kms via a domestic flight from Rangoon or Mandalay. 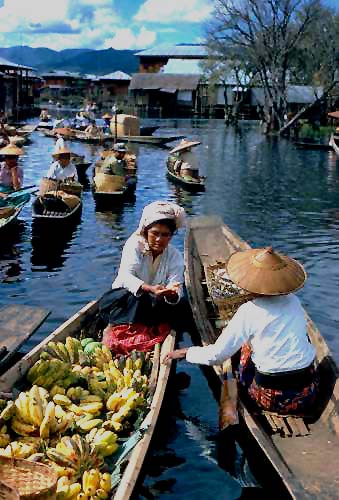 Australian photojournalist and author. Used London as a base for nearly forty years while freelancing in the Middle East, Arabian peninsular, Africa and South Asia. Have written and illustrated more than a dozen books and travel guides. Operates a well regarded religious images stock photo library: www.worldreligions.co.uk. Live in Leura in the Blue Mountains outside Sydney.
View all posts by Travels with My Hat →
This entry was posted in Culture and tagged Asia, boats, Buddhism, Burma, floating, Inle, Inthas, lake, leg-rower, market, Shan. Bookmark the permalink.

21 Responses to ROWING IS A BIG LEG-PULL IN BURMA