I am astonished to learn that the relatively unknown emirate of Ras al Khaimah, is to host the 33rd trials of the America’s Cup. The Societe Nautique de Geneve, owners of the defending yacht Alinghi, has decided the light off-shore winds in February are ideal sailing weather.

One of the seven United Arab Emirates, RAK lies at the entrance of the Gulf. On one side is Musandam, the rocky enclave owned by Oman and on the other, the flat desert state of Umm al Qaiwain.

I went to RAK for a quiet holiday a couple of years ago. Like Dubai and Abu Dhabi, it was madly building vulgar, nouveau-Gulf style villas. There was a souq, a ‘must have’ shopping mall, a Kentucky Fried Chicken outlet and four hotels.

The al Hamra Town House boasting a big swimming pool, was my choice for a break. But another reason for my trip was that I wanted to photograph the last old coral stone buildings before they were bulldozed.

In bygone days, Ras al Khaimah was known as the  ‘Pirate State.’ Its fleet of big, ocean-going dhows used to harass British shipping until blown out of the water in 1820 when the ruler was obliged to sign the  Treaty of Perpetuity.

In truth, the emirate is more attractive than other Gulf states having a rugged mountain range as backdrop to a deep-water creek to rival Dubai’s.

In my book The Gulf States and Oman, written in the late 1970s, I interviewed an official on plans for development which were then just beginning.

‘What is your income from fishing?’ I had asked him.
‘Enough for food,’ he’d replied.
‘What is your GDP?’
‘I don’t know anything about GDP. Nobody knows what the income is in Ras al Khaimah and what’s more, they have no budget. How can they, if they don`t know the income?’ he told me.

The affairs of state, including the apparently successful bid to stage the America`s Cup trials in 2010, are handled by the Crown Prince, Sheikh Saud bin Saqr Al Qassimi. 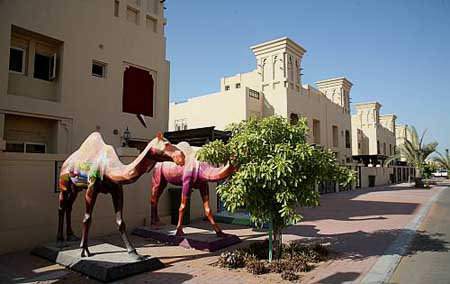 Australian photojournalist and author. Used London as a base for nearly forty years while freelancing in the Middle East, Arabian peninsular, Africa and South Asia. Have written and illustrated more than a dozen books and travel guides. Operates a well regarded religious images stock photo library: www.worldreligions.co.uk. Live in Leura in the Blue Mountains outside Sydney.
View all posts by Travels with My Hat →
This entry was posted in Comment and tagged America's Cup, Arab, Gulf, RAK, Ras al Khaimah, sailing, trials, yachting. Bookmark the permalink.