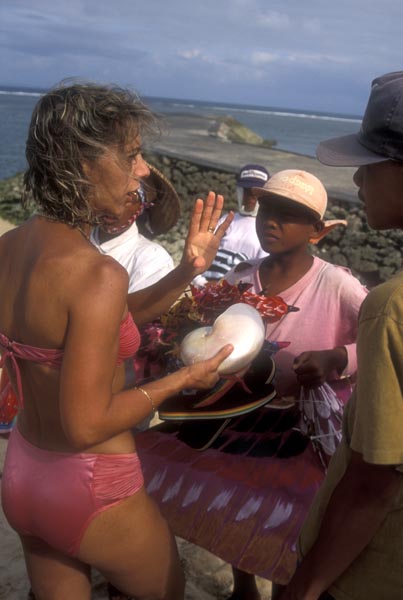 When I was growing up in Australia, we caught our own bait for fishing.

Pippi-shells wiggled out of the beach, worms dug up from the mud, prawns drifting down the channel on the night tide. Dad used to shine a torch on the water and I would scoop them into a net. There used to be quite a few when I was eight. Less when I was twelve. And by the time I was a teenager, there were none at all.

This was our small contribution to the decimation of local sea-life. We didn’t know the prawns were drifting in to breed on the sand banks of Lake Macquarie where we lived, 90 miles north of Sydney.

Older and now well travelled, I’ve seen humans catching marine life-be it prawns, squid, sharks or tuna – all over the world. But what about the shells. Oh the shells!

The rape of the ocean’s marine life is out of control. The oil-leak in the Gulf of Mexico may kill a few hundred turtles, but it is nothing, absolutely nothing, compared to the numbers of creatures being harvested in developing countries to satisfy Asian peccadilloes and tourist greed.

Australian photojournalist and author. Used London as a base for nearly forty years while freelancing in the Middle East, Arabian peninsular, Africa and South Asia. Have written and illustrated more than a dozen books and travel guides. Operates a well regarded religious images stock photo library: www.worldreligions.co.uk. Live in Leura in the Blue Mountains outside Sydney.
View all posts by Travels with My Hat →
This entry was posted in Comment and tagged Bali, marine, sea-shells, sealife, Seychelles, souvenirs, tourism, trochus. Bookmark the permalink.

5 Responses to SHE BUYS SEA-SHELLS ON THE SEA SHORE…