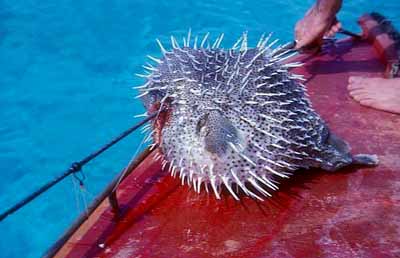 Sorry, for the spear fisherman drowned off Sydney, but … those   who would protest at the indiscriminate shooting of native birds, seem not to object to the ugly activity of spear-fishing in Australian coastal waters.

I recall as a child, a giant blue-green parrot fish lying on the beach with a hole in its head at Long Reef, one of Sydney’s northern beaches. Trusting fish which do not flee a diver,  wrasse, or parrot fish are not tasty eating, so clearly this was slaughter. Now forty years on, you can dive anywhere around Sydney, but you won’t see a giant parrot fish any more.

It`s a mockery to have state road patrols which care for injured wildlife – even snakes -while spear-fishermen continue to kill innocent marine life. The boneheads even hold competitions to see who can spear the biggest fish!

I have absolutely nothing against spear-fishing in poor African countries where entire families depend on the catch for food. But it is a senseless sport in Australia which considers itself a developed, eco-friendly nation.

Australian photojournalist and author. Used London as a base for nearly forty years while freelancing in the Middle East, Arabian peninsular, Africa and South Asia. Have written and illustrated more than a dozen books and travel guides. Operates a well regarded religious images stock photo library: www.worldreligions.co.uk. Live in Leura in the Blue Mountains outside Sydney.
View all posts by Travels with My Hat →
This entry was posted in Comment and tagged Africa, Australia, boneheads, cruel, diver, diving, drown, octopus, Pacific, porcupine fish, spear-fishing, spearfisherman, sport, Travels with My Hat, wrasse. Bookmark the permalink.

23 Responses to SPEAR-FISHING IS FOR BONEHEADS