Thailand is internationally famous for memorable meals. Be they simple dishes in a fishing village. Or elaborate buffets served in tourist hotels.

One meal I remember in particular was on the terrace of the Oriental Hotel overlooking the Chao Phaya river winding through capital Bangkok.

The occasion was Loy Krathong, a Buddhist festival held on the full November moon and drifting downstream were thousands of tiny banana-leaf boats each containing a flower, a coin and a candle, a custom to appease the water spirits.

My companion and I had found it appropriate to start with tom yum kung, a sour and spicy prawn soup, but unfortunately Stefan — who’d just arrived from Frankfurt —caught one of the explosive chilies used in the recipe and coughing violently, was obliged to retire.

I continued eating alone, wading through crispy spring rolls, roast duck curry, stir-fried vegetables and baskets of rice. Once I went upstairs to check on Stefan whom I found asleep with several bottles of mineral water on his bedside table.

During the night I was disturbed by Stefan calling room service for a hamburger. The time change had been too much for him: slowly I reflected, is the best way to grow accustomed to Thai food.

The Kingdom of Siam was never conquered. Local cooking is an amalgam of different cuisines, a result of ancient trade links with China, India and Portugal until gradually these foreign influences became absorbed into what is a uniquely Thai repertoire.

Several ingredients give Thai food its special taste. Universal is nom pla a pungent sauce made from fermented fish of which one or two drops adds zest to any dish. Phak chi or coriander is another aromatic flavour.

The dynamic taste of many dishes comes from chillies of which more than a dozen types are used in cooking. The hottest phrik khi nu luang, is the tiny orange-yellow chilli Stefan encountered in his soup.

More subtle flavours come from lemon-grass and freshly grated coconut milk a popular ingredient in curries as well as desserts.

Soup arrives with a delicately carved slice of cucumber floating in the bowl, lotus-shaped carrot buds highlight a dish of rice while fruits such as melons and pineapples are transformed into works of art. 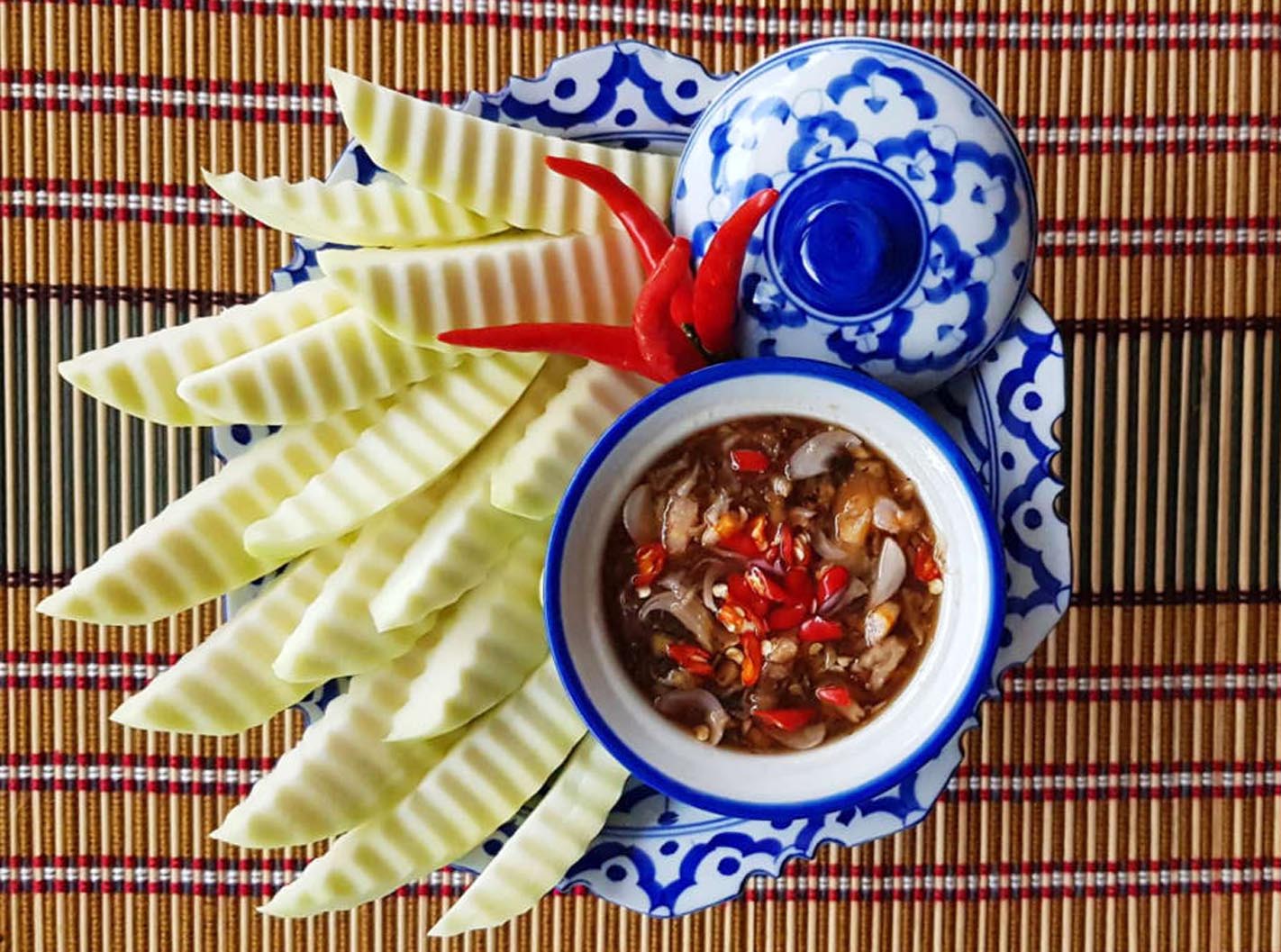 A typical meal includes a large bowl of rice with at least five side dishes —soup, curry and vegetables known as gap kow — meaning ‘with rice.’

Other gap-kow such as spring rolls and beef stir-fry have Chinese origins. There will also be a fish or meat dish, usually pork, plus steamed vegetables and salads.

There is no order to eating. One can eat soup first or last. Etiquette requires you take small portions and although they would not admit it, Thais find the Western custom of piling everything on a single plate distasteful.

Dessert is commonly fresh fruit or a sweet dish based on fruits such as durian or mango basking in creamy coconut sauce.

Thailand’s exotic fruits — spiky durians, hairy rambutans and gigantic jackfruit (some weigh as much as 20 kilos) are sold in Bangkok’s Central Market.

Arriving early I was able to browse through the stalls before the shoppers.

I noticed a saffron-robed monk carefully inspecting packets of khanom phin — cookies made from beanflower and shredded coconut. From pyramids of pastel-coloured sweets he chose khanom pui fai or ‘cotton wool cakes’ — someone in the monastery obviously has a sweet tooth, I decided.

Following him into the fish market, I watched him buying a kilo of blue-green prawns from the Gulf of Siam. Moving onto vegetables, he bought coriander, lemon grass, mushrooms and kaffir lime leaves: tom yum kuang was on the luncheon menu!

Outside I decided to have breakfast at one of the busy street stalls catering to people on their way to work. Mussel omelette was my choice, tossed in a pan over a charcoal stove.

Without the disturbance of Stefan choking, I was eating slowly and savouring the scene when the cook banged a bottle on the table.

Passed to me, I found a few drops transformed my simple omelette into a dish of regal status.

I took nom pla when I left Thailand and have found it works miracles in a variety of dishes cooked at home.

Australian photojournalist and author. Used London as a base for nearly forty years while freelancing in the Middle East, Arabian peninsular, Africa and South Asia. Have written and illustrated more than a dozen books and travel guides. Operates a well regarded religious images stock photo library: www.worldreligions.co.uk. Live in Leura in the Blue Mountains outside Sydney.
View all posts by Travels with My Hat →
This entry was posted in Food and tagged Asia, cuisine, floating market, food, fruits, markets, monk, prawns, spices, Thailand, tradition. Bookmark the permalink.

6 Responses to THE DELIGHTS OF THAI CUISINE