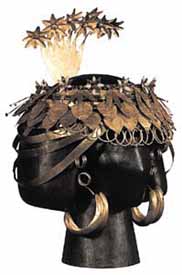 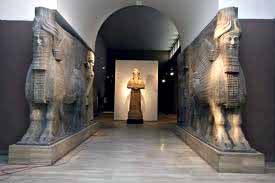 …The next day, I took a taxi to the Iraq National Museum founded by Gertrude Bell, the great Orientalist, political officer and archaeologist who spoke both Arabic and Persian. Here under a single roof, I could finally feast on treasures from Mesopotamia and forget the crude public relations exercise of previous days. And evidently satisfied I could do no harm, the minder sat on the steps smoking a cigarette, leaving me free to explore alone.

The museum was deathly quiet except for my footsteps on the wooden floor.

I passed the Warka Vase, a giant alabaster vessel engraved with processions of naked men bearing offerings to Inana, the Sumerian Goddess of Love and War. Glass cases displayed ancient pottery and sculptures, cuneiform tablets from Sumerian and Babylonian times, and stunning stone reliefs from the palace of the Assyrian king Sargon II at Khorsabad. Among this abundance of priceless objects, I wanted to find the Golden Lyre from the burial chamber of Queen Pu-Abi, who lived in the celebrated city of Ur.

Excavation of the royal tombs by Sir Leonard Woolley in 1929 had discovered a munificence of grave goods: a head-dress made of golden leaves; extravagant necklaces and belts; a chariot adorned with lioness’ heads in silver along with golden rings and bracelets. The legendary lyre had been found standing upright against a wall of the pit. Beside it lay the bodies of thirteen maidservants with beautiful adornments – retainers sacrificed to serve their mistress in another world.

‘It would seem,’ said Sir Leonard ‘as if the last player had her arm over the harp, certainly she played till the end.

Suddenly picked out by a shaft of sunlight, I saw the lyre encrusted with lapis lazuli and with the gold-bearded bull on the front representing Shamash, the Sun God and hopeless at anything musical myself, I shivered with excitement as I imagined Sumerian fingers plucking its strings some 5,000 years ago. 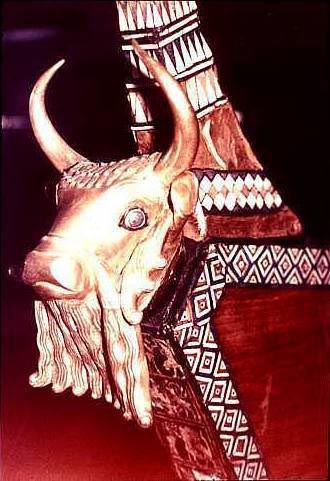 My thoughts were interrupted by the minder creeping up behind me. In order to reach Hatra before dusk, he indicated we had to leave. Now! He was the same pock-faced man who had shadowed me since my arrival in Baghdad and the only time he spoke on the journey north was when we passed Tekrit.

‘Saddam Hussein!’ he said, jerking a finger at the town where Saddam was born in 1937 and where Saladdin with whom the Iraqi president liked to compare himself, had been born 800 years earlier…

From a visit to Iraq in 1980: c. Christine Osborne

Australian photojournalist and author. Used London as a base for nearly forty years while freelancing in the Middle East, Arabian peninsular, Africa and South Asia. Have written and illustrated more than a dozen books and travel guides. Operates a well regarded religious images stock photo library: www.worldreligions.co.uk. Live in Leura in the Blue Mountains outside Sydney.
View all posts by Travels with My Hat →
This entry was posted in TWMH Excerpts and tagged Assyrian, Baghdad, bull-head harp, Iraq, jewellery, lyre, museum, photos, Travels with My Hat, treasures, Warka vase. Bookmark the permalink.