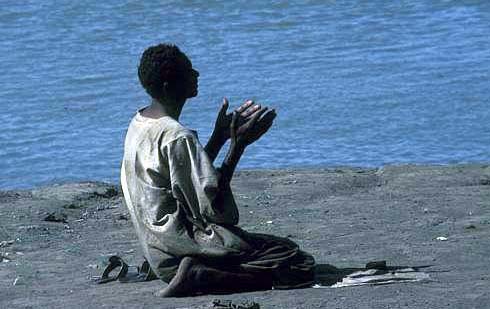 I came home on the bus this morning with a man from the Sudan. I had seen him many times, herding long-horned cattle, or playing an oud with long fingers that now clutched a cheap plastic briefcase. And clearly he did not know where to go.

‘Can I help?’ I said, touching his elbow gently.

I noticed a trace of orange henna at his temples, as he turned towards me. Many Muslims dye their beard with henna when they have performed the hajj or pilgrimage to Mecca.

His beard has been shaved off, but the trace of henna and the zebiba (prayer mark) on his forehead, tells me he is a good Muslim. A good Muslim with one wonky eye.

‘Clapham Common,’ he said in an almost panicky voice, bending down, all six feet six of him, to look anxiously out of the window as we crossed over Vauxhall bridge.

‘Yallah,’ I said getting off at the inter-change.

But he was far too concerned about Clapham Common to realise that a strange ‘English’ woman had uttered a word of Arabic in the heart of Vauxhall.

‘Thanks you much!’ he said, evidently knowing the way.

I watched him hurrying along the road in his new brown leather shoes until he disappeared on a traffic crossing and was out of sight. It could have been me, a thousand times over, struggling to find my way around Khartoum, or Sana’a or Salalah during one of my forays into the Arab world.

Australian photojournalist and author. Used London as a base for nearly forty years while freelancing in the Middle East, Arabian peninsular, Africa and South Asia. Have written and illustrated more than a dozen books and travel guides. Operates a well regarded religious images stock photo library: www.worldreligions.co.uk. Live in Leura in the Blue Mountains outside Sydney.
View all posts by Travels with My Hat →
This entry was posted in General and tagged Africa, humble, Islam, man, Moslem, Muslim, Nile, people, photography, prayer, religions, river, Sudan. Bookmark the permalink.

One Response to THE MAN FROM SUDAN