Excerpt from Chapter 7 of my forthcoming book Travels with My Hat, 85,000 words, 8 pages of pictures. Chapters on Ethiopia, the Royal Tour of Arabia, Pakistan, Egypt, Iraq, Yemen. Pictured is the terrible Cafe Lemsid in the Western Sahara, from the final chapter on Morocco. 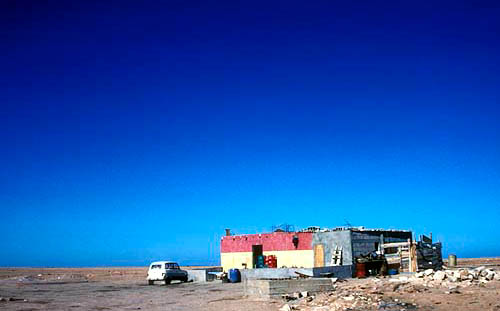 …I’ve often thought I’d found the middle of nowhere on my travels, only to realise that I was on the edge of somewhere, but the Café Lemsid was definitely in the middle of nowhere. Caramel and raspberry red, it resembled a giant lolly that had fallen off a desert transport and surrounding it lay the detritus of local civilisation: burst tyres, perished fan-belts, broken lobster-traps and empty port-a-gas cylinders. A rug was stuffed in a hole in the wall to keep out wind-blown sand, and among items stacked behind its counter were boxes of Gunpowder tea, flour, candles, packets of “Tide”, balls of string and inevitably— tinned sardines.  It’s owner said fresh fish arrived daily from Boujdour, so that even in this god-forsaken place I was able to sit down at a broken table for lunch (grilled dorade).  A lame, fish-eating chicken hopped about for scraps: it would never be killed and eaten, I decided; it was much too horrible. As I settled my bill, a grand-taxi pulled up and I half expected it to disgorge a host of characters from a Fellini  film—dwarfs, transvestites and dancing bears—but they were merely crushed passengers from Dakhla, relieved for the chance to stretch their legs on their long journey up to Agadir…

Australian photojournalist and author. Used London as a base for nearly forty years while freelancing in the Middle East, Arabian peninsular, Africa and South Asia. Have written and illustrated more than a dozen books and travel guides. Operates a well regarded religious images stock photo library: www.worldreligions.co.uk. Live in Leura in the Blue Mountains outside Sydney.
View all posts by Travels with My Hat →
This entry was posted in TWMH Excerpts and tagged book, building, cafe, car, derelict, desert, hat, journey, Morocco, travel, Travels with My Hat. Bookmark the permalink.

3 Responses to The Terrible Cafe Lemsid