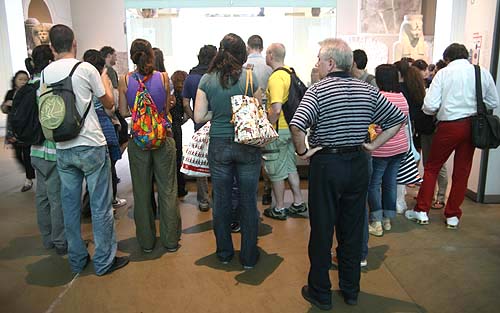 Last week I went to the British Museum to have some coins from the lovely Swat Valley, in north-west Pakistan, identified by numismatic experts।

I knew they were old, but not from the 4th century AD! Coins from the Kushan Empire: King Vasishka in front of a fire altar on one side and Shiva with Nandi, the bull-god on the reverse.

I was delighted by this news, but walking through the museum, I was appalled by visitor behaviour. Thousands of tourists hogged every showcase, blocking the view for everyone else, including many British pensioners on a cultural outing.

I waited for an American family to provide space for me to view artefacts from the royal tombs in Ur. But would they budge? Not likely! The woman planted herself in front and there she remained. When she did move, she glared as if to say, it`s my right. I`m here from Des Moines!

The behaviour was equally bad in the Etruscan Room and the crowd gathered around the Elgin Marbles was impenetrable. A tour-guide was lecturing her group of Italian tourists – bugger everyone else!

It was the same in the Egyptian Galleries. And to make things worse, everyone was wearing a backpack so they were taking up the space of two!

Does anyone hate backpacks as much as I do?
There is no admission charge to the British Museum. The Coins Department is open weekdays for a coin identification service 10.00-13.00 and 14.15-16.00 except Wednesday mornings.

Australian photojournalist and author. Used London as a base for nearly forty years while freelancing in the Middle East, Arabian peninsular, Africa and South Asia. Have written and illustrated more than a dozen books and travel guides. Operates a well regarded religious images stock photo library: www.worldreligions.co.uk. Live in Leura in the Blue Mountains outside Sydney.
View all posts by Travels with My Hat →
This entry was posted in Comment and tagged backpacks, behaviour, British Museum, crowds, London, manners, people, tourist, Travels with My Hat. Bookmark the permalink.