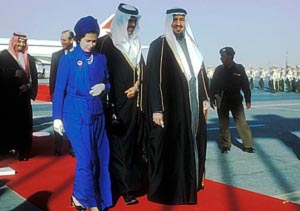 …The Concorde bringing the Queen to Saudi Arabia touched down in Riyadh……Suddenly there was pandemonium. Everyone, including the State Guards, was running this way and that and after years of working alone, I forgot our strict orders not to leave the press group. Dashing outside the airport, I hailed a passing taxi.

‘Quick! The Nasirya Palace!’ I told the driver.

The Queen and the Duke were to stay here while the Britannia sailed to Dhahran, in the Eastern Province of Saudi Arabia. A photo-call at the palace was not on our itinerary, but I hoped to sail in on a bit of bluff. Especially since I was an honorary man!

The Indian taxi-driver entered into the spirit of the moment as though his country was still under the British Raj. Speeding along the sandy highways and byways of Riyadh, he screeched to a halt in front of a mammoth building flying the Union Jack. And above it, fluttering in the desert wind, was Her Majesty’s personal standard.

‘This is the Nasirya Palace memsahib,’ he said, reversing the dented red Datsun in between gleaming black limousines.

Racing up the palace steps, I nodded at the Bedouin guards. Did they think I was an advance on the ladies-in-waiting? Without asking, they waved me inside a vast foyer lit with chandeliers the size of flying saucers.

It took courage to stand there surrounded by many princes of the estimated 7,000 members of the House of Saud: tall, erect men all wearing the bisht edged with gold, the mark of nobility. My eyes roamed over onyx tables and huge vases of flowers, but my flashlight sparked a buzz of conversation and feeling vulnerable, I wound my long black scarf around my face like one of their own women.

When a Rolls Royce drew up at the palace steps, attention shifted from me to the Queen. Trained not to flinch, Her Majesty passed me with only a brief look of surprise. Had I gone completely native?

Trailing behind her, the Duchess and Lady Susan looked perturbed. Could Buckingham Palace have erred? Should they too be veiled. Dresses brushing the marble floor, they swept towards the majlis and before anyone could enquire why I didn’t follow them, I scampered back to the taxi.

‘It’s the most exciting day of my life!’ said the old Indian. ‘Finally something to write home about from this god-forsaken country.’

Back at the Riyadh Inter-Continental, my luck was in when a helpful MEA pilot offered to take my films to London. My editor, Ita Buttrose, had been insistent we beat rival Woman’s Day to press. Leaving Riyadh at midnight, the films were collected next morning from the Kensington Hilton in London and were Sydney-bound that afternoon.

A week later my article – CARRY ON DOWN THE GULF MA’AM – THE SHEIKHS LOVE YOU! captured attention ‘Down Under’.

Image: Her Majesty is welcomed by King Khalid at Riyadh International Airport.

10 Responses to Travels with My Hat: from Chapter 3 Member of the Royal Press Corps