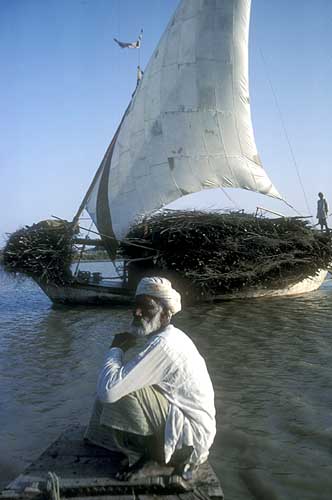 The Mohanas on the river Indus in Sindh have a novel way of fishing when bad weather prevents their boats putting out. They keep pet birds to do it for them.

The birds, mainly herons, cranes and cormorants, perch on a plank suspended from the gunwale. A length of string attached to one leg allows them to dive, but not to escape with a fish. When they break surface, they are robbed of their catch until the family has enough to eat. At this point the birds may swallow their prey and satisfy their own hunger. 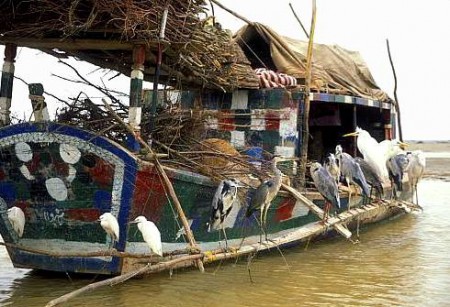 Several hundred Mohana fishing families work the Indus where it flows past Sukkur, an historic town in upper Sindh province of Pakistan.

They live on bulky wooden houseboats, 60 feet long by 12 feet broad. The khasti`s most characteristic feature is a bluff prow to deflect the shock should a boat strike a submerged sandbank when it swivels around and gradually becomes dislodged by the current.

An average Mohana family numbers 6-8. All the relatives moor together in a group with their domestic stock- water buffaloes and chickens – kept beside them on the bank. 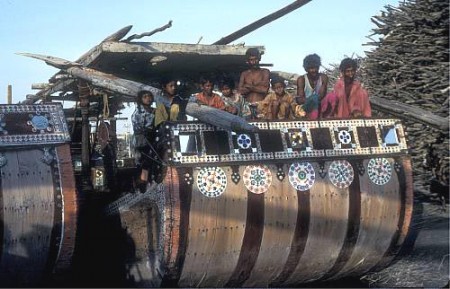 Women are responsible for the usual chores. One of their first tasks is to draw fresh water from the middle of the river, away from the banks where people defecate.

Mohana men fish from a smaller boat, paddled with a single oar, towed behind each kashti. Working together, in good weather they may net 30 kilos of fish a day, the Indus river catfish being greatly prized.

Meals are cooked over a small charcoal fire on the open deck with everyone sitting around the dish, digging into the fish and rice with their fingers.

Following this year’s monsoon which has devastated NW Pakistan, the Indus is running at an all-time high. But while Sindhi farmers are packing and leaving the riverbanks, the Mohanas can only sit on their boats as water levels rise. 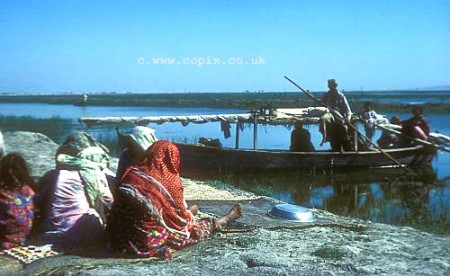 Australian photojournalist and author. Used London as a base for nearly forty years while freelancing in the Middle East, Arabian peninsular, Africa and South Asia. Have written and illustrated more than a dozen books and travel guides. Operates a well regarded religious images stock photo library: www.worldreligions.co.uk. Live in Leura in the Blue Mountains outside Sydney.
View all posts by Travels with My Hat →
This entry was posted in General and tagged boats, boy, child, family, fish, fishermen, industry, kashti, Mohanas, Pakistan, people, river, Sindh, Sukkur. Bookmark the permalink.

8 Responses to WAITING FOR THE FLOOD