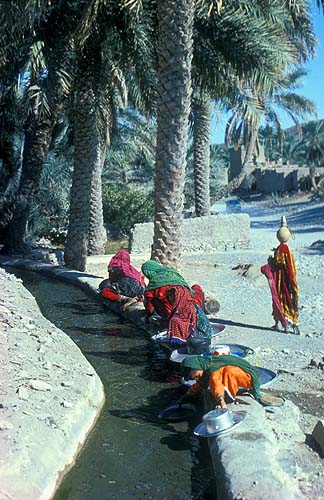 Years ago, I met an old Bedouin woman in Abu Dhabi who said her greatest joy was being able to turn on a tap after years of drawing well water in the desert. Thanks to oil wealth she is one of the lucky ones, but today 10 million people, mainly in developing countries, live without access to safe water and proper sanitation.

Clean drinking water is a right, not a necessity, for every person on the planet and as the world population grows and aquifers shrink, future conflicts will arise over water. And not over oil as in therecent past.

The rationale for water usage dates back to a vast dam built to store water for workers quarrying stone for the Pharaohs  In Southern Arabia, the Sabaeans also constructed the mighty Marib Dam. The Sumerians, Akkadians and Babylonians were all skilled canal builders and ancient falaj like the one pictured above, are still in use in Oman.

When you think that the shadouf (a bucket and pulley contraption for raising water) was invented some 2400 years ago: is it not shameful that spacecraft are sent to the Moon before the Earth’s peoples have a proper water supply?

The situation is especially critical for many poor countries in Africa and Asia which have become dependent on tourism for revenue, when tourism is the biggest water consumer of all.  The FAO estimates that in 55 days, 100 hotel guests use water equivalent to the needs of 100 urban families over two years. An 18-hole golf course soaks up the requirements of 100 Malay farmers.

Many NGO’s are directing their efforts to supplying villages with drinking water and while travel writers can do their bit, the onus is on travel agents to stress to tourists – particularly anyone visiting East African resorts that are currently suffering the most severe drought in decades – to consider water usage.

Shower with your partner (bathe in the sea) and don’t allow sheets and towels to be changed on a daily basis. You can turn on a tap in your hotel, but local communities may not have access to the infrastructure ensuring your supply.

All images available from: www.copix.co.uk

Australian photojournalist and author. Used London as a base for nearly forty years while freelancing in the Middle East, Arabian peninsular, Africa and South Asia. Have written and illustrated more than a dozen books and travel guides. Operates a well regarded religious images stock photo library: www.worldreligions.co.uk. Live in Leura in the Blue Mountains outside Sydney.
View all posts by Travels with My Hat →
This entry was posted in General and tagged aquifers, Christine's sites, comfort, dams, Marib, poor countries, population, rights, safe, shadouf, tap, tourism, travels with a hat, water. Bookmark the permalink.