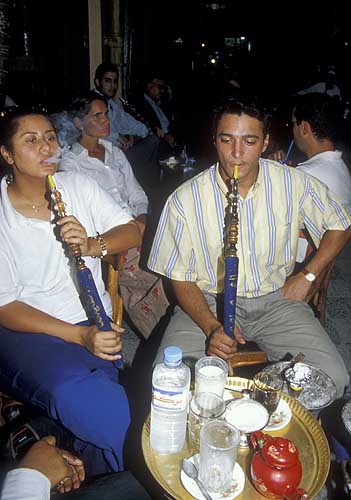 We have the trial coming up in September of the Sudanese woman journalist who committed the so-called crime of wearing trousers in a restaurant in Khartoum. Penalty, if convicted, 40 lashes.
And now, the equally conservative government of Malaysia, is to cane a young model because she drank two beers. (Not to mention the unfortunate African-Canadian woman imprisoned by Kenyan authorities, because her lips did not match her passport photo).
Curious how I`ve seen so many Muslims enjoying a drink on my travels, yet one never hears of a man being whipped.
By contrast to these rabid decisions, I see where the forward thinking government of Sultan Qaboos, is to relax restrictions on hotels serving alcohol to non-Muslims, during the holy month of Ramadan.
Oman is not a wealthy country by Gulf states standards and with tourism becoming a significant contributor to the GDP, the move is to be applauded.
c.Christine OsborneImage: Scene in a cafe in CairoSource: www.copix.co.uk

Australian photojournalist and author. Used London as a base for nearly forty years while freelancing in the Middle East, Arabian peninsular, Africa and South Asia. Have written and illustrated more than a dozen books and travel guides. Operates a well regarded religious images stock photo library: www.worldreligions.co.uk. Live in Leura in the Blue Mountains outside Sydney.
View all posts by Travels with My Hat →
This entry was posted in Comment and tagged alcohol, beer, cane, journalist, mad, Malaysia, Muslims, Oman, Ramadan, Sudanese, Travels with My Hat, trials, women. Bookmark the permalink.