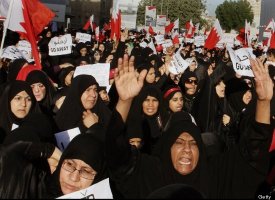 While it is good to see Arab women protesting alongside male demonstrators in the Arab uprisings, it is appalling to learn how at the first opportunity, many men turn to rape.

The shocking attack on the CBS journalist in Cairo, and now this terrible video of the poor Libyan woman crying out for help to the international media, is a violent and graphic reminder that women face specific and harrowing abuse in times of war and conflict.

Someone has left a post on Twitter re Eman al-Obeidi, the woman beaten and raped by Gaddafi lackeys in Libya —- what can we do, we must do something, she tweets. The terrible thing is we can’t. And as I write this blog, she is incarcerated, somewhere unknown, certainly being tortured, even being raped again, for boldly, desperately, speaking out.

On the outside, looking in, we can only pass on the message and support by whatever means, the brave women who dare to speak up. Women like Marvi Sirmed in Lahore, ‘Zeinobia’ in Cairo and Emma Al Nafjan in Riyadh, to name just three of many courageous female bloggers putting their freedom at risk for daring to write of unacceptable situations in their respective countries. .

And neither let us forget the thousands of African women in Rwanda, Congo and Darfur who have been gang-raped by soldiers. Pray for women at risk everywhere in this violent world and wish the bastards who commit such atrocities may rot in hell.

Australian photojournalist and author. Used London as a base for nearly forty years while freelancing in the Middle East, Arabian peninsular, Africa and South Asia. Have written and illustrated more than a dozen books and travel guides. Operates a well regarded religious images stock photo library: www.worldreligions.co.uk. Live in Leura in the Blue Mountains outside Sydney.
View all posts by Travels with My Hat →
This entry was posted in Comment and tagged Arab, Egypt, Eman al-Obeidi, Libya, Obaidy, protest, rape, violence, women. Bookmark the permalink.

8 Responses to WHERE IS EMAN AL-OBEIDI?