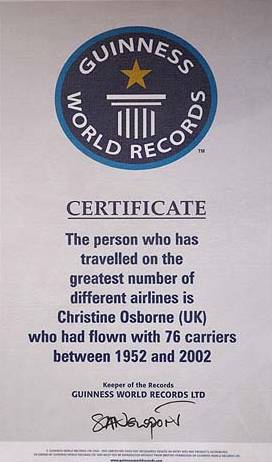 Missed my blogs? I’ve been flying. In fact I’m a member of the esteemed Guinness World Records club for having flown on the greatest number of different airlines (today’s figure is more like 80).

Colourful memories include flying with falcons on Gulf Air and goats on Ethiopia Airways. Of tackling the hazardous routes through the Karakorams on PIA and helping out when Tunis Air was a stewardess short on a flight to Djerba. Of performing CPR on a KLM passenger as we landed in Amsterdam. Of the time I had to fly as a wheelchair passenger on Air India when all the wheels fell off at Bombay International Airport.

Some flights stand out. How could I forget the night of 21/9/71 when the engines on our BOAC VC10 caught fire and we hurled ourselves down the emergency slides. ‘Lucky to be alive,’ a ground engineer informed me. Or the occasion when Sudan Airways overflew Cairo because they said I was the only boarding passenger. ‘Don`t be silly,’ I told the manager when he said it had left: the point being that it hadn’t landed!

Do I have a favourite airline? Malaysian, JAL and Qatar Airways are very good, but after my recent flight to Sydney and back, I would have to single out Singapore Airlines. Not just for the superb in-flight service, but for the spacious, whisper quiet, fuel efficient, A380-300.

Since 2007, the six A380-300s operated by Singapore Airlines have carried over one million passengers on the London-Singapore-Sydney route.

72 m long, the giant planes are designed to accommodate 525 seats, but Singapore Airlines carry only 471 passengers, thus ensuring more space for long legs like mine.

The position of the galleys, located well away from the loos, is also a big plus for both the convenience of the crew and the comfort of passengers. And the A380 is kinder to the environment since it burns around 20 per cent less fuel, on a seat-mile basis, than similar jumbo aircraft.

I paid my own fare to Sydney and back to London so this is not a puff for Singapore Airlines but a genuine compliment from one who has made the 20 hour journey ‘Down Under’ some twenty times over the years.

My only complaint of the 24,000 mile round trip is that the charming ‘Singapore Girls’ could not make a good ‘Bloody Mary’.

Australian photojournalist and author. Used London as a base for nearly forty years while freelancing in the Middle East, Arabian peninsular, Africa and South Asia. Have written and illustrated more than a dozen books and travel guides. Operates a well regarded religious images stock photo library: www.worldreligions.co.uk. Live in Leura in the Blue Mountains outside Sydney.
View all posts by Travels with My Hat →
This entry was posted in General and tagged A380-300, aircraft, carriages, certificate, christinebosborne, flying, Guinness Records, jumbo, plane, Singapore Airlines, Travels with My Hat. Bookmark the permalink.

2 Responses to WHISPERING THROUGH THE SKIES