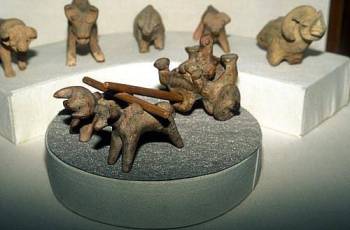 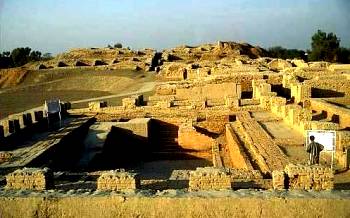 The celebrated Indus Valley site of Mohenjodaro in Pakistan was not merely an agrarian settlement, but a well planned city which had reached an advanced stage of learning long before the birth of Christ.

The key to its past lies in deciphering the complex ‘Indus script’ but it seems likely that its inhabitants spoke Dravidian —Mohenjodaro means ‘Mound of the Dravidians.’

Excavations have revealed the city was meticulously planned on a grid system, with three and four storey houses lining its long straight streets, a sophisticated drainage system, with wells and granaries constructed of baked bricks.

While few clues exist of its rulers, the presence of a vast bath sunk in a spacious courtyard once lined with decorative columns, points to a purification ritual, possibly observed by a priestly sect.

Among artefacts found on the site are terra-cotta figurines of buxom women of a type of ‘Mother Goddess’. The discovery of lingam stones also suggests worship of the phallus, still widely observed among Hindus in India. Terracotta chess sets and animal images including bulls, bears and dogs, indicate the Indus Valley citizens were skilled at making kiln-fired pottery.

Villagers continue to use a foot-driven wheel and drawn by a pair of animals, ox-carts no different to those in Mohenjodaro of 2500 years ago, still rumble along local roads on the banks of the river Indus.

Mohenjodaro was destroyed at least seven times by floods and rebuilt on the top of ruins each time. Tragic history could now be repeated as current floodwaters threaten to engulf the priceless site.

Australian photojournalist and author. Used London as a base for nearly forty years while freelancing in the Middle East, Arabian peninsular, Africa and South Asia. Have written and illustrated more than a dozen books and travel guides. Operates a well regarded religious images stock photo library: www.worldreligions.co.uk. Live in Leura in the Blue Mountains outside Sydney.
View all posts by Travels with My Hat →
This entry was posted in General and tagged bath, brick, Dravidian, floods, heritage ancient, Mohenjodaro, ox-cart, Pakistan, ruins, World Heritage Site. Bookmark the permalink.